Members of the 40 Under 40 Society, a group of young alumni, left to right, are Enoch Bond, Darrien Jerman, Emanuel Basnight, and Alicia Stokely. These alums spoke to students during Homecoming 2017.

The legacy that Elizabeth City State University graduates leave behind after graduation is the success they pave as they move out into the world. And nothing speaks to that fact better than when young alumni return to share their stories with current students.

That was the case during Homecoming Week when four inaugural members of the 40 Under 40 Society spoke to current students on Thursday, Oct. 12. Darrien Jerman, Emanuel Basnight Jr., Alicia Stokely, and Enoch Bond shared their stories from their days as students, and their successes as graduates of ECSU.

Jerman, who graduated in 2008, is a fifth generation ECSU graduate. He said he had been encouraged by a teacher, a 1980 ECSU graduate, to visit campus. Once he got to know the family-oriented environment, he knew he was home.

Now working as a deputy Title IX manager and director of fraternity and sorority life for North Carolina Central University, Jerman cites his involvement in many campus activities, including the Student Government Association, as having a strong impact on the skills he needs to navigate the professional world.

Basnight, who graduated in 2002, is an Elizabeth City native now working as an advertising executive in Chicago. After graduating from ECSU, he earned a master’s degree from East Carolina University. He says ECSU provided him not only a good place to focus on his undergraduate work, but also attractive, low tuition.

“I knew that I wanted to go to graduate school and I knew that I didn’t want to be saddled with debt,” he said.

Basnight says he had a defining moment when he was chosen for a fellowship with a national advertising firm. He recalled that he had gone up against, and beat out, graduates of high-profile schools such as Harvard and Yale for the fellowship. His experience at ECSU, he said, prepared him for that moment, and the moments which led up to that success.

Stokely is a 2014 graduate of ECSU. She currently works as coordinator of student life at College of the Albemarle in Elizabeth City. She began her student career as a pharmacy science major, and was having success there. But she wasn’t sure it was what she wanted to do for the rest of her life. Her experience at ECSU, the faculty and the staff support, and the nurturing campus environment gave her the guidance she needed to make decisions that have led to her current career path.

For Bond, a 2004 graduate, the focus faculty and staff put on the students was also an important factor in his success as a student. Currently working as the associate director development and alumni relations at the School of Law at North Carolina Central University, Bond reflected back on his time on campus as one that would provide him with the type of support which encouraged him to succeed.

ECSU, he said, is a family.

“They (faculty and staff) treated me like I was their son,” said Bond.

The close-knit experience continued after he graduated from ECSU. When Bond, an Edenton native, moved to Durham after graduation, ECSU alumni took him out to dinner, made him feel welcome, and only asked that he continue to do the same for other recent graduates.

Bond continues to give back to his alma mater, as do Basnight, Jerman, and Stokely.

“The true spirit of the Viking,” Stokely said, “is giving back to your community.” 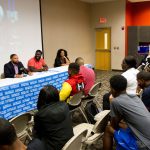