0
268 Views
Warning: json_decode() expects parameter 1 to be string, object given in /srv/users/serverpilot/apps/ecsunewsroom/public/wp-content/plugins/posts-social-shares-count/classes/share.count.php on line 66
0
Shares 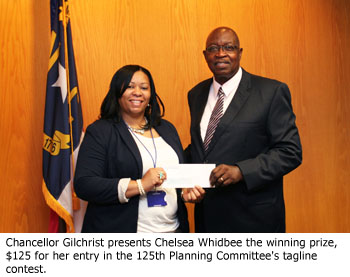 Elizabeth City State University is fast approaching its 125th anniversary. The 125th Planning Committee is busy slating events that will spotlight the accomplishments of the people and momentous events that occurred along this journey. Those events will be held during the 2015 -2016 academic year. The committee held a contest for alumni, students, staff and faculty to contribute possible taglines for the anniversary campaign. Thirty entries were considered however, Chelsea Whidbee’s suggestion, &quotProud Heritage of Inspired Excellence&quot most appealed to the committee. Whidbee, an ECSU alumna, is an accountant for the university. Her prize is $125 and tickets to all the special events held in connection with the 125th anniversary.