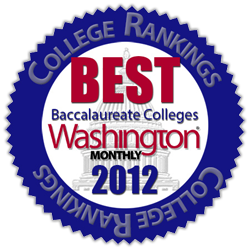 Elizabeth City State University ranked Number 1 among baccalaureate colleges in Washington Monthly ‘s 2012 college rankings. The rankings were released Aug. 23, 2012, in the September-October issue of the magazine. In citing ECSU, Washington Monthly editors touted the graduation rate of students, along with the cost of attending. &quotElizabeth City is extremely affordable, with one of the lowest reported net prices in the nation,&quot the article stated. Editors considered a wide range of factors before ranking the 100 institutions placed in the baccalaureate category. Editors considered three key categories – social mobility, research and service – but no single factor was considered more important than another. Excellence across the scope of factors mattered most. Social mobility included factors such as of the percentage of students receiving Pell Grants, the predicted/actual graduation rate based on the percent of Pell recipients incoming SAT scores, the net price of attendance and the cost-adjusted graduation rate performance rank. Under the category of research, editors considered research production and the number of undergraduates go on to earn Ph.Ds. The category of service included factors such as the university’s Peace Corps rank ROTC rank the percentage of federal work-study funds spent on service and community service participation and hours served. ECSU moved to Number 1 from its position ranked as Number 5 in the magazine’s 2011 college guide.