Volunteers Rally to Raise Funds on ECSU Day of Giving

0
667 Views
Warning: json_decode() expects parameter 1 to be string, object given in /srv/users/serverpilot/apps/ecsunewsroom/public/wp-content/plugins/posts-social-shares-count/classes/share.count.php on line 66
0
Shares

Inside the Elizabeth City State University Kennis E. and Brenda E. Wilkins Call Center a bank of phones are lined against the walls each of them operated by a Day of Giving volunteer. On this day Tuesday June 27 2017 ECSU has launched the first-ever Day of Giving campaign.

The University’s goal is to raise $150000 from 3000 donors benefiting a number of causes both community and university-related. Donors can make gifts and add their names to the list of donors by either answering the call or going to www.ecsu.edu/ecsugives.

Donors can support several initiatives including the ECSU National Alumni Association’s Student Support Initiative that seeks to raise $10 Million dollars over the next five years to support student scholarships. Participating in the ECSU Student Support initiative ensures the long-term growth of the university and its students for generations to come.

– ECSU Athletics Support Fund-invest in our student-athletes to help create championship-level competition on the field in the classroom and in life beyond ECSU.

There are also a number of Day of Giving challenges. This year’s challenges include the Decades Challenge Divine 9 Challenge Community Challenge as well as the Chancellor’s Challenge to ECSU Departments.

ECSU is an integral part of the community and the University seeks to promote economic social and environmental progress for the people of Elizabeth City northeastern North Carolina the state and the nation. With broad support from each constituent during this pivotal time in the University’s history Elizabeth City State University will continue to be a leading regional partner in offering world-class teaching learning research and service for many years to come. 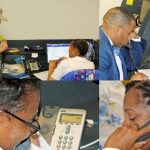 Volunteers Rally to Raise Funds on ECSU Day of Giving