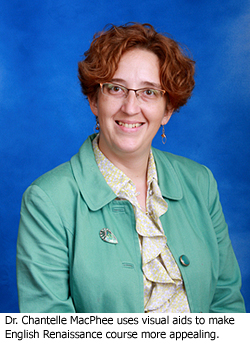 Just five years ago, students enrolled in English 427 would have taken a traditional classroom approach to studying Renaissance Literature. The classroom scene would have included thick textbooks, reference books, some laptops, desks, students, a movie screen, and an instructor committed to weekly meetings in Johnson Hall at a specified time. All that changed this semester.

Dr. Chantelle MacPhee has changed the scenery. The students no longer are required to park in the lots at Elizabeth City State University or trek across campus toting multiple books. They can take the course from their homes or any place where they can access the Internet. Lively class discussions still revolve around European literature published between the 14th and 17th century. Now, students exchange comments and communicate with MacPhee by blogging.

MacPhee selected well respected movies and literary video clips for their view on YouTube. Within seconds, students can see online, Emmy award winning actress Helen Mirren, portraying Queen Elizabeth I and her passionate Speech to the Troops at Tilbury. The video’s sound of a cheering crowd of land forces, an accommodating orchestra and the view of the waterside replaces the white pages of text students of yesteryear relied upon when studying literature. MacPhee has also provided web links for recorded music from the Renaissance era for the students. This class certainly includes MacPhee’s lecture notes. She found a way to infuse technology into a literature course and removed the age old fear that language from the Renaissance Literature will dishearten students.

It makes learning new, innovative and combines traditional lecture style with visual aids to help a student immerse him or herself into the culture, language, history and music of the period he or she is studying,&quot MacPhee said.

Renaissance language is a big challenge for students but they can see in this literature how the language has transformed. I suggest they note how the authors from that era manipulated language to get a point across to be or not to be, that is the question Shakespeare wrote.&quot

Whether in the classroom or teaching online, MacPhee tells her students that literature helps the reader understand culture, understand the perils of leaders, what makes them great in some ways or what makes them poor in others. Literature reveals the reasons that rulers came from a certain lineage. It also reflected examples of the changing norms and customs for women.&quot

Gender roles began to shift after the Renaissance. Religion was a very important issue in that era. I challenge my students to learn how Queen Elizabeth I came to throne, how Elizabeth chose to marry, how she used public speeches to relay her intentions. History and culture are linked, MacPhee said.

MacPhee’s passion for using technology in the classroom began in 2000, when she began work as an Instructor at Clemson University in South Carolina. She continuously took training sessions to learn how to use Smart boards and more devices to keep current with online teaching mechanisms. She was born and raised in Canada and earned her master’s degree from the University of Western Ontario and her doctorate degree from at the University of Glasgow in Scotland. Thee she saw scenes that were frequently described in numerous poems and plays from literature’s coiffures. On a recent trip to Scotland, where she presented at the British Association of Romantic Studies, she took over 400 pictures of landscape and castles that will be available this week for view by students enrolled in English 427.

The pictures will provide recent images of the landscape and help students understand what inspired the poets to write about the nature that surrounded them daily. Moreover, the pictures are meant to reveal the castles built centuries ago that housed kings and queens of England and Scotland. The images will show them scenes that differ from Hollywood sets,&quot MacPhee said.

I even brought back pictures of the Jacobite know well know by youngsters as the famous train depicted in Harry Potter movies. Once again, modern film has taken a bit of reality, the train, and used it for storytelling purposes. Literary writers did the same thing when they used castles and well known landscapes as scenes in their plays or poems.&quot

While MacPhee is still fond of teaching in a classroom, she hopes students will find the online version very informative. The cost of resources for classes is diminishing as more sources become available online. The convenience of online courses continues to appeal to traditional and nontraditional students to earn college credit while working or meeting family demands. Ultimately, MacPhee hopes to lure additional students to the Language Literature Communication Department for a wider selection of literature courses. Other stimulating literary forms she would like ECSU students to study include African Literature, Caribbean literature, Canadian Literature and Postcolonial Literature .