0
487 Views
Warning: json_decode() expects parameter 1 to be string, object given in /srv/users/serverpilot/apps/ecsunewsroom/public/wp-content/plugins/posts-social-shares-count/classes/share.count.php on line 66
0
Shares 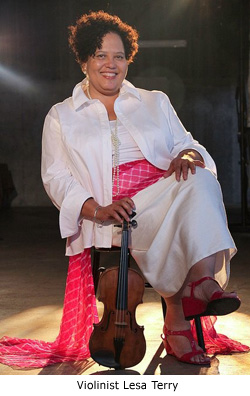 The Elizabeth City State University Department of Music presents the Third Annual Jazz Festival at 7:30 p.m. on April 9 in the auditorium of the Mickey L. Burnim Fine Arts Center. This year’s festival features violinist Lesa Terry, who will join the ECSU Jazz Ensemble in an explosion of jazz standards, Latin and Brazilian sounds. Terry also will perform selections with the ECSU String Ensemble and local musicians Dennis Figgs on piano, Steve Raisor on the bass and Ellard Forrester on drums. In addition, the audience will be treated to the premier of the ECSU Guitar Trio, three ECSU music majors whose principal instrument is the acoustic guitar. Terry is the founder and musical director for the Women’s Jazz Orchestra of Los Angeles. She has performed with a variety of groups, including the Max Roach Double Quartet, the Atlanta Symphony Orchestra and the Los Angeles Chamber Orchestra, as well as for Broadway musicals &quotPhantom of the Opera&quot and &quotLes Miserables.&quot Her television credits include the Grammy Awards, American Idol and The Simpsons. Terry also has been featured on recordings with her cousin, the legendary trumpeter Clark Terry, and with Max Roach, The Uptown String Quartet and Yusef Lateef. She also has recorded a CD, &quotA City Called Heaven.&quot Terry holds a bachelor’s degree in music from California State University, Northridge and a master’s degree in Afro-Latin music from California State University, Los Angeles. In 2010, the University of Rhode Island presented her with an honorary doctorate in arts. General admission for the jazz festival is $5 students and children under age 12 enter free if they present their school I.D. card at the door. Purchase tickets at the ECSU Cashier’s Window in the Marion D. Thorpe Administration Building or at the entrance of the Mickey L. Burnim Fine Arts Center. Tickets also may be purchased online at www.etix.com. For more information, contact Douglas A. Jackson at (252) 335-3377 or dajackson@mail.ecsu.edu.