0
264 Views
Warning: json_decode() expects parameter 1 to be string, object given in /srv/users/serverpilot/apps/ecsunewsroom/public/wp-content/plugins/posts-social-shares-count/classes/share.count.php on line 66
0
Shares 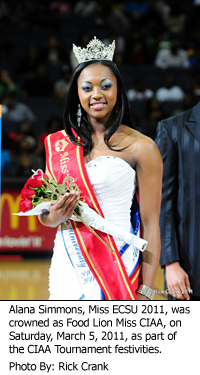 Kesha Williams
March 14, 2011 Hail to the Queen! Miss Elizabeth City State University, Alana Renee Simmons, was crowned Food Lion Miss CIAA 2011 on Saturday, March 5, 2011 during the Central Intercollegiate Athletic Association (CIAA) Tournament.As winner of Food Lion’s Miss CIAA scholarship contest, Simmons will receive a $2,500 scholarship. Food Lion has sponsored the CIAA Tournament for over 17 years and is the title sponsor for the Miss CIAA competition. Simmons was one of 13 queens who competed in the Food Lion Miss CIAA competition. The queens had several segments in which they were judged: grade point average, essay, biography, extracurricular activities, community service, appearance, votes from the public and an interview.Simmons is a native of Newport News, Virginia, who graduated from Hertiage High School. She is a senior majoring in Music Education with a concentration in piano. Upon graduation, she plans to attend graduate school to become a school administrator or school counselor. Her ultimate goal is to one day open a community center for children and adults to study the arts at no cost. Simmons believes that arts have a positive impact and should be incorporated in our lives daily.

Other news from the 2011 CIAA tournament

The Delta Chi Chapter of Delta Sigma Theta Sorority, Inc., won the 2011 CIAA Step Show Throwdown and Stepoff. Participating step team members include: Alexis Littleton (senior), Shante King (senior), Alana Simmons (senior), Heather Smith (junior), Latisha Hardey (junior), Ada White (senior), Constance Singletary (senior), and Fletcher Peoples (senior). The chapter will receive $1500 and a plaque. The step show was sponsored by McDonalds and Amtrak and was held on March 4, 2011. The Beta Zeta Chapter of Alpha Phi Alpha Fraternity, Inc., also competed in the event.Also, ECSU alumni had a successful fundraiser, the Chancellor’s CIAA Breakfast, on March 5. Approximately 300 alumni and supporters gathered for the fundraiser and raised $107,000. Twelve chapters participated in the event held at the Omni in Charlotte. Corporate donations included $10,000 from Nationwide and $10,000 from Wells Fargo. NASA representatives also attended in support of the university. Barbara Sutton, director of Alumni Relations, said she appreciates the alumni donations and the efforts everyone made to organize the event. She appreciates those who traveled to Charlotte and everyone’s ongoing support. &quotOur goal was to raise $100,000 and we surpassed the goal. Our chapters worked so hard to raise the money and we can’t thank everyone enough for another successful Chancellor’s CIAA Breakfast,&quot Sutton said. Darrien Jerman contributed to this story