0
534 Views
Warning: json_decode() expects parameter 1 to be string, object given in /srv/users/serverpilot/apps/ecsunewsroom/public/wp-content/plugins/posts-social-shares-count/classes/share.count.php on line 66
0
Shares

Senior William Howard is a psychology major with a deep, silky voice. It’s the sort of voice you might expect to hear on the radio, so when he arrived nearly two years ago at the studio of WRVS-FM 89.9, the campus radio station, he was practically snatched up on the spot as an on-air personality.

Howard recalls that he had expressed interest in the Elizabeth City State University campus radio station to a friend. He was directed to the studio, located inside Williams Hall, said he was curious about volunteering there, “and the next thing I know I’m on the air.”

Howard has been on the air with a couple of fellow Vikings, hosting the weekly show “Way Back Wednesday.” The show, he says, is an expression of his love for older music, like soul.

“We just have a passion for music that is not appreciated as much anymore,” said Howard.

And like Howard, you don’t have to be a communications student to participate, Smith says.

The opportunities for students to volunteer, and participate in radio and television production, extend beyond hosting shows, says Clay Mercer, production director and on-air host for WRVS. Mercer, a graduate of ECSU who has worked in major radio markets such as Washington D.C., says students can gain experience in promotion, marketing, social media marketing, and more.

“We’re helping students understand that there is more to radio than just talking  on the microphone,” says Mercer.

For example, a business student might be looking for practical, hands-on experience in marketing. Mercer says volunteering at WRVS will give the students that hands-on experience, and a chance to learn skills, development them, and then carry them out into the professional world after graduation.

And of course, just as Howard enjoys producing and hosting, students do get the opportunity to be a part of live radio programming. Junior communications major, Mattelyn Bond, says Mercer, provides great color commentary during “High School Game of the Week,” a WRVS exclusive program that features area high school basketball.   She also produces her own short segment, “Ask Mattie” during Mercer’s  afternoon drive-time show.

“Students email me for advice and I get on the air to discuss them,” says Bond, whose advice segment will start up again for the new semester during the second week of September, every Tuesday and Thursday at 4 p.m.

Radio is only half of the broadcast story at ECSU. The university also provides a television station which not only has a campus-only, closed circuit channel , but also a cable accessible channel.

Dreama James is a senior communications major and president of the ECSU Mass Media Club who says she enjoys working behind the camera, producing and directing shows. She’s currently working on developing a project for broadcast which could be aired later this semester.

Melba Smith, while directing both radio and television services for the campus, is putting her focus on television these days. She’s working with students, and specifically the Mass Media Club, to bring back a popular campus broadcast, “Vikings Reloaded,” an ECSU news show which will begin airing around Oct. 1, in time for homecoming.

Smith says the television station is a “diamond in the rough ,” which is hungry for more student participation. She says there is a, “Big opportunity for growth.”

“What we will see this semester is more production opportunity for students to showcase their work,” says Smith.

Like radio, the television station provides students with both on-air and behind-the-scenes experience. With a television station, and newsroom set, the infrastructure is in place, but Smith says it’s time for more students to get involved with the work needed to bring that station alive.

“Students show up and they will have the opportunity,” said Smith.

Students like Bond, James, and Howard are examples of what happens when you get involved with the ECSU radio and television stations. All three point out that, unlike some university campuses, ECSU has up-to-date, professional equipment which allows them to have the sort of hands-on experience needed when heading out into the world.

That experience, if they choose to pursue a career in radio or television, says Smith, will give them an advantage over others entering the job market. And there are ECSU students, such as Viking graduate Valerie Edwards, who have found success as a journalist – she currently works for the Daily Mail, a U.K. newspaper with an office in New York City – thanks in part to her experience with the Mass Media Club, and the radio and television stations.

Howard adds that his work with WRVS is also a chance to feed his passion for good music.

“I love it,” Howard says of his work at the radio station. “You get to come here and speak about what you love.”

For more information about volunteering at either the radio, or television stations, send an email to wrvsfm@gmail.com, call 252-335-3518, or stop by the radio station at Williams Hall, room 160. 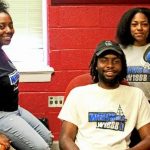