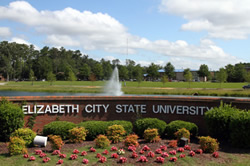 Elizabeth City State University continues to be recognized among the region’s best public colleges. The newly released rankings in U.S. News &amp World Report magazine’s &quot2013 Best Colleges&quot places ECSU third among the &quotTop Public Schools Regional Colleges (South).&quot It also ranked the 121-year-old institution as 20th among the Best Historically Black Colleges and 30th among all colleges – public and private – in the South. Dr. Ali Khan, ECSU’s provost and vice chancellor for the Division of Academic Affairs, said the rating reflects an understanding of the quality of the university’s faculty, staff and students. &quotWe are certainly pleased with our ranking as third among top public schools in the South. It is based on our overall performance and reputation,&quot he said. &quotThere are over 100 schools in this category. Clearly, this places us among the most productive and competitive academic programs. The reputation of our institution matters and carries weight. It will definitely impact the student selectivity, retention and graduation rate.&quot As part of its annual guide, U.S. News &amp World Report ranks colleges and universities across the nation in several categories based on up to 16 indicators of academic excellence. Among those indicators are freshman retention rates, student graduation rates and the high school class standing and SAT or ACT test scores of its entering students. The strength of the faculty also is factored in, along with information about the institution’s financial resources and rate of alumni giving. U.S. News &amp World Report also conducted a separate peer survey, asking institutions within the same category to rank one another. The results of the survey, done in spring 2012, helped to produce rankings for about 1,400 colleges and universities. According to the annual guide, the nation’s top Historically Black Colleges and Universities (HBCUs) are an increasingly appealing option for applicants of all races. Many HBCUs, in fact, are actively recruiting Hispanic, international and white students in addition to the African-American high school grads heading to college in record numbers. To be part of the &quotBest Black Colleges&quot category, an institution has to be designated currently by the U.S. Department of Education as an HBCU, a status created as part of the federal Higher Education Act of 1965. Additionally, the college must be a baccalaureate-granting institution that enrolls primarily first-year, first-time students and must also have been part of this year’s Best Colleges process. Eighty HBCUs were eligible to be ranked. &quotOf the HBCUs ranked, we are proud to be ranked among the top 20,&quot Khan said. &quotECSU offers a diverse selection of majors that well prepares students to serve the state and the nation. Through the dedication of our staff, faculty, alumni, trustees and other supporters, ECSU continues to be a special and an affordable place for students to learn and grow.&quot