0
3.2K Views
Warning: json_decode() expects parameter 1 to be string, object given in /srv/users/serverpilot/apps/ecsunewsroom/public/wp-content/plugins/posts-social-shares-count/classes/share.count.php on line 66
0
Shares 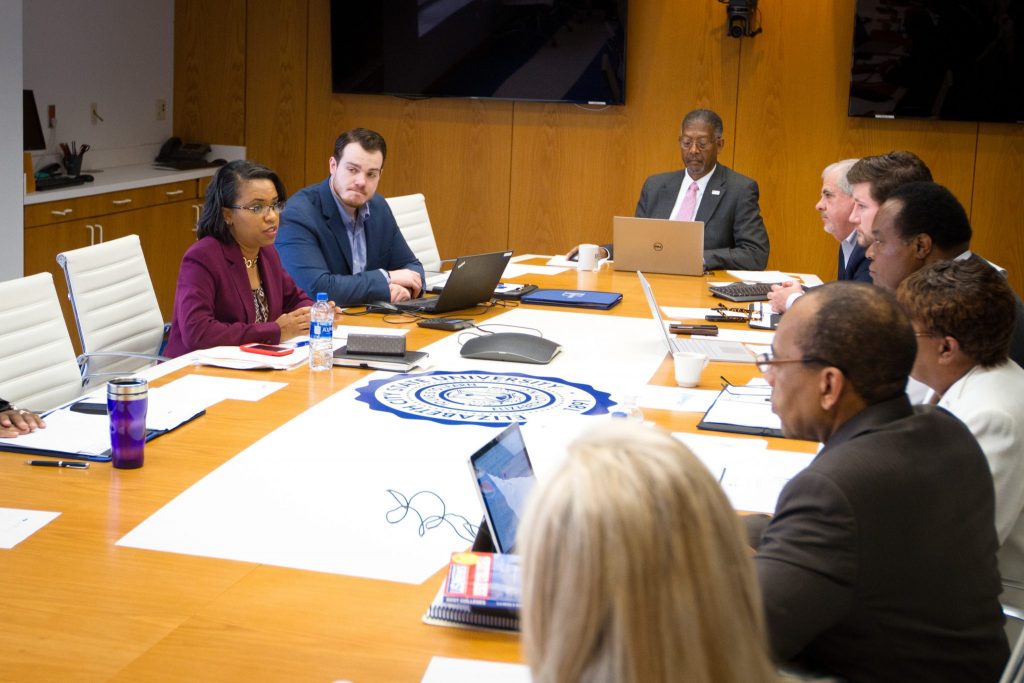 In this undated file photo, members of the ECSU New Directions: Phase 2 Working Group discuss university progress during a session in the Chancellor’s Board Room. The Working Group met on Wednesday, May 30, to report on the progress of efforts to set the foundation for future growth of ECSU.

Upgraded facilities, more funding for growth, increased enrollment and aviation program accreditation are the items that had members of the ECSU New Directions: Phase 2 Working Group excited about the future.

Led by Board of Trustee vice chair, Harold Barnes, the Working Group met to discuss the advancement ECSU is making and the positive outlook on the future of the institution.

During the meeting, three areas reported updates: enrollment and financial aid, finance and campus beautification, and an update on the aviation program accreditation.

The expressed purpose of the Working Group has been to establish a firm foundation for the university, positioning it for strong growth. One of the key factors in building this foundation has been the support of the UNC Board of Governors, and the expressed desire of its members to pursue the funding necessary to support that growth.

While increasing enrollment has been a primary focus, how the campus looks and what sort of facilities it offers students when they arrive has been a priority for the group. Vice Chancellor of Business and Finance, Josh Lassiter, told the Working Group that much is being done to upgrade the campus, but more is needed, including the construction of a new library.

While the NC Connect Bond, approved by voters in 2016, earmarked funds for the renovation of the G.R. Little Library, Lassiter says it became apparent that a more state-of-the-art facility would be required to accommodate the kind of growth ECSU is anticipating in the coming years. And while the construction of a new library would require additional funds from the State of North Carolina, Board of Governor members, including Harry Smith, the incoming board chair, say they are committed to finding the funding required by the University for these Upgrades.

Lassiter also highlighted a number of beautification projects happening on campus. Currently residential hall outdoor commons areas are being redesigned and landscaped, and a green area adjacent to the Thorpe Administration Building is being primed for a facelift.

A new look to the ECSU main entrance will also be completed sometime this summer, including new signage, sidewalks and landscaping.

Spellings, who phoned into the meeting from Chapel Hill, was on campus earlier in May as the keynote speaker for the 166th ECSU commencement ceremony. The energy behind the changes, she said, was clearly felt by the students, faculty, staff and guests attending the ceremony.

Lassiter said projects such as the green near Thorpe are underway and he anticipates they will see completion in time for the start of the fall semester in August. When August comes around, university officials are anticipating a larger freshman class than last year.

Dr. Althea Riddick, interim director for enrollment, said freshman enrollment is up over last year. Last year at this time, she said, new freshmen numbered at 349 and currently there are 397.

Riddick said May, June, July, and August are key months for enrollment and she anticipates seeing higher numbers as ECSU moves into the summer months. She said currently there are 499 confirmed applications for enrollment, and her admissions staff is currently working to bring those potential students in as enrolled members of the ECSU student body.

“We’re pleased with the numbers but not satisfied,” said Riddick. “We’re going to continue to recruit.”

Riddick also said that with the extension of the Minimum Admissions Requirement program, more students from the state’s Tier 1 and Tier 2 counties – economically depressed regions of the state – will have an opportunity to enroll at ECSU.

“This broadens our reach across the state,” Interim Chancellor Karrie Dixon said of Riddick and her team’s efforts to bring new students to ECSU.

Across the state, ECSU is also becoming known for its aviation program. ECSU is currently the only four-year institution offering a bachelor’s degree in aviation in North Carolina. ECSU Provost Vann Newkirk told the Working Group that efforts to have the program certified by the Aviation Accreditation Board International, or AABI, will open the university to new partnerships.

With AABI accreditation, ECSU would be able to partner with commercial airlines such as American Airlines subsidiary, Piedmont Air. That partnership could potentially bring scholarship money to students, provide them with a pipeline to top aviation jobs, and also establish ECSU as a training ground for airline employees.

The next, and the last, Working Group meeting will be held Wednesday, June 27, at 10 a.m. in the Chancellor’s Board Room, on the third floor of the Thorpe Administration Building. 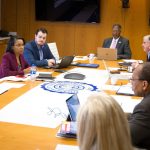