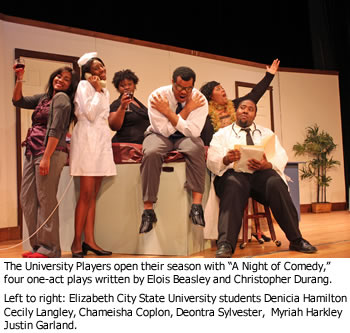 The University Players of Elizabeth City State University began the 2013-14 season with one of the oldest and best known genres in theatre – comedy. From Oct. 30 through Nov. 2, students presented &quotA Night of Comedy,&quot four, one-act plays written by American playwrights Christopher Durang and Elois Beasley. The cast included five students who are majoring in music and one who is majoring in mass communication. For Billicia Hines, associate professor in the Art Department and director of ECSU’s theater program, comedy was a good place to start the season. &quotEach year, you evaluate the students who enrolled in theater classes and then select something that suits their interests and ability. Their interests varied from opera, musical theater, to comedy plays,&quot Hines said. &quotAs usual, I make sure the students understand what they must bring to the stage in order for a show to be successful -courage, discipline, a positive attitude, willingness to learn, learning how to use their voices and, of course, a good memory for the lines.&quot After considering several relevant factors and her students’ prior experience performing on stage, Hines identified the possible plays to produce. Hines favored Tony Award-winning playwright Christopher Durang, whose work has appeared on and off Broadway. Durang, she said, can elevate normal life situations to &quotan extreme level of funny,&quot even in a one-act play. &quotFor instance, in ‘The Doctor Will See You Now,’ you find a frustrated patient who wonders if the nurse and doctor are really paying attention to him,&quot Hines explains. &quotThe patient suspects he has an allergy problem, but they suspect a venereal disease, which outrages him,&quot Hines said. &quotWho hasn’t wondered at some point if the doctor is really listening to you while you describe your symptoms and changes in the way you feel?&quot To Hines’ delight, Kenneth Tate, a fellow staff member and auditorium director for the Mickey L. Burnim Fine Arts Center, was available to direct two of the plays, &quotDMV Tyrant,&quot and &quotThe Doctor Will See You Now.&quot Tate has been involved in theater more than 30 years, with experience acting and working assorted positions behind the scenes. Tate also helped ECSU students learn to build sets, set up stage scenery, and understand lighting and audio. He advises students to get as much experience in the theater as they can. Thanks to practice and years of commitment, Tate said he is capable of reciting hours of play lines. He encourages students to gear up for that kind of challenge while they are young adults. &quotStudents must be willing to sacrifice because acting is a time-consuming job. We put in more time rehearsing than a football player,&quot Tate said. &quotThere are more jobs behind the scenes with theater than you might think. We look forward to seeing committed students get involved (in theater) then finding out where they fit.&quot Hines said the audience will find a far different genre for the University Players’ spring semester production. She will play the role of Henrietta Lacks, a Virginia tobacco farmer whose cancer cells were secretly used in numerous medical research projects that her family was unaware of decades after her death. Later, the students will return to the stage to perform monologues from Shakespeare’s plays. When students wonder if they are ready for such acting challenges, she reminds them that successful actresses and actors benefited from the help of coaches, workshops and commitment to the trade. While their ability to memorize is truly amazing, it didn’t happen overnight. &quotMost people don’t use the full capacity of their brainpower, but you can work toward it especially while memorizing lines for plays. Make (memorization) a part of your life,&quot Hines said. &quotRecord yourself reciting the lines then listen later. Recite your lines while washing dishes or folding clothes like I do. You just might be surprised by what you can learn to do.&quot Photo caption: The University Players open their season with &quotA Night of Comedy,&quot four, one-act plays written by Elois Beasley and Christopher Durang. Left to right: Elizabeth City State University students Denicia Hamilton, Cecily Langley, Chameisha Coplon, Deontra Sylvester, Myriah Harkley, Justin Garland.