0
202 Views
Warning: json_decode() expects parameter 1 to be string, object given in /srv/users/serverpilot/apps/ecsunewsroom/public/wp-content/plugins/posts-social-shares-count/classes/share.count.php on line 66
0
Shares 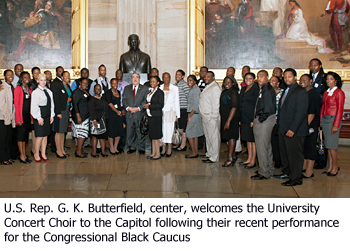 The Elizabeth City State University Concert Choir traveled to Washington on Sept. 22 to sing for the Congressional Black Caucus Foundation’s Gospel Extravaganza. The event was part of the CBC’s Annual Legislative Conference, which draws thousands of people to the nation’s capital for four days of workshops and activities.

The ECSU Concert Choir was invited by Congressman G.K. Butterfield to represent the state of North Carolina. It was one of four groups, including a praise team and a community choir, participating from North Carolina, Georgia, South Carolina and Mississippi.

The event marked the first time Dr. Walter Swan, director of choral activities and associate professor of music in the ECSU Music Department, led the choir to the annual gospel concert, which was held at United House of Prayer for All People. The 31 ECSU students performed two selections -&quotHealing,&quot written by Richard Smallwood, and a new arrangement of the classic Negro Spiritual, &quotI Will Trust in the Lord.&quot

Swan says the event was an enlightening experience for the choir.

&quotIt was an honor for us to appear at the Gospel Extravaganza, especially after being invited by Congressmen Butterfield,&quot he said. &quotIn addition to singing for the elected officials, this event also provided the students with a view and a tour of the Capitol.&quot

For most of the students, the trip was their first to the Capitol.

After the tour, Congressman Butterfield talked with the group for more than an hour, answering students’ questions about the economy, the national debt and health insurance.

The University Concert Choir now begins preparations for their upcoming public performances in Elizabeth City.&ampnbsp The choir is scheduled to perform Nov. 18 at Southgate Mall in Elizabeth City. Their choir’s annual Christmas concert will be held Dec. 3 in the auditorium of the Mickey L. Burnim Fine Arts Center on ECSU’s campus.