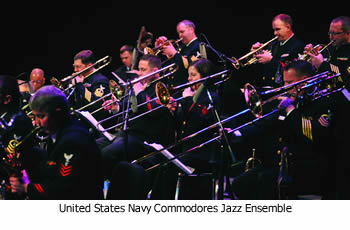 Elizabeth City State University welcomes the United States Navy Commodores Jazz Ensemble at 7:30 p.m. on April 14. The Commodores, the Navy’s premier jazz ensemble, have been performing the very best of big band jazz for the Navy and the nation for over 40 years. They have appeared on TV shows, played nearly all major jazz festivals and toured across the United States and abroad. This vibrant, dynamic group is constantly striving for musical excellence and the pursuit of new and exciting ways to communicate with their audiences. The concert is free. For more information, contact Mr. Douglas Jackson in the Department of Visual and Performing Arts, 252-335-3377.