Elizabeth City State University’s Undergraduate Research Week is on and the events are unfolding now through Friday April 7 when the Department of Visual and Performing Arts presents the 2017 ECSU Jazz Festival.

At 10 a.m. Monday April 3 faculty and students gathered in the Jenkins Science building to kick off the week-long event.

Dr. Farrah Ward Associate Vice Chancellor for Academic Affairs opened the event describing a week of presentations and activities designed to bring students from all disciplines into the fold affording them an opportunity to experience a broad range of academic interests.

“We designed this so each day is a specific theme” explained Dr. Ward.

For Monday the events revolve around education and psychology. Tuesday is STEM Day and it will feature the return of the popular Amazing Undergraduate Research Week Race based on the popular television show The Amazing Race.

Some of the highlights of the week include 3D animation and film editing a master class with internationally acclaimed photographer and ECSU alum Joshua McFadden and a question and answer session with the family of Dorothy Vaughan whose fame was brought to light in the recent hit film “Hidden Figures.”

Vaughan an African American woman was one of several women considered “human computers.” Employed by NASA’s Langley Research Center in Virginia Vaughan worked directly with the Apollo missions in an age when women much less African Americans were rarely involved in the advancement of the United States’ space program.

The program will also include arrangements that will feature the combined Jazz Ensemble and Steel Drum Band.

The Rhythm Project is a world percussion ensemble dedicated to the nurturing of self-esteem through individual and cooperative achievement. Founded in 1996 the program was started in Portsmouth Virginia by the Virginia Arts Festival.

There are four elementary and three middle school Rhythm Project groups that feed the program’s premiere performing ensemble the All-Stars. The All-Stars is a year-round program for high school students. The program focuses on instilling discipline and dedication in students through performance and touring opportunities. Additionally two high school groups complete the family of 10 Rhythm Project ensembles that serve the cities of Norfolk Virginia Beach and Portsmouth.

The Robinson Auditorium is located in the Mickey L. Burnim Fine Arts Center on the ECSU campus. The show starts at 7 p.m. doors open at 6:30 p.m. 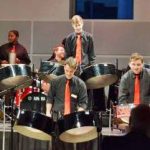