0
185 Views
Warning: json_decode() expects parameter 1 to be string, object given in /srv/users/serverpilot/apps/ecsunewsroom/public/wp-content/plugins/posts-social-shares-count/classes/share.count.php on line 66
0
Shares 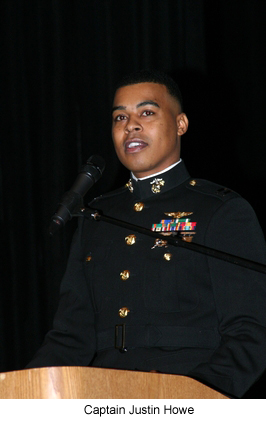 Kesha Williams
February 14, 2011 Area middle and high school students rushed to campus on February 4 to for tours of the Pharmacy Complex, wind tunnel demonstrations and to view dozens of research projects completed by the students in the ECSU School of Mathematics, Science and Technology. It was all part of Research Week 2011. Before departing, they settled into the auditorium of the Fine Arts Center for a motivational speech from Captain Justin Howe, a pilot for Marine One—- a pilot for President Obama. Howe is a native of Chesapeake, a graduate of Deep Creek High School and Hampton University where he majored in Aviation Airport Management. &ampnbspHe joined the United States Marine Corps in January 1999 and completed Weapon and Tactics courses (Top Gun for the Marine Corps) in Yuma Arizona. He is a Winged Naval Aviator who served in both Operation Iraqi Freedom and Operation Caring Response Humanitarian Assistance Mission in Burma. Captain Howe was also a member of the Indonesian Humanitarian Assistance Middion, 31st MEU, in the aftermath of the 2009 September 30th 7.6 level earthquake.Howe told the youths, his career allowed him to carry out missions with some of the world’s best trained men and women. He said a good education and commitment to the goals and objectives he set for himself led to an exciting career that allowed him to see numerous countries around the world. With three of his former school teachers in the audience and his mother, Howe urged them to follow the advice he received as a youngster— to set goals now for a host of careers that await them. &quotI was an average student in middle school and in high school but envisioned myself as a pilot just like the pilot who appeared in a picture on the wall of one of my teachers,&quot How explained to the students. &quot I’ve had to take a lot of tests as I advanced in the military but now I make As on my tests and you can too,&quot Howe said. How shared a video with the audience and personal photos he made while traveling.&ampnbsp The attending students came from Perquimans County Middle School, Pasquotank High School (ROTC students), Elizabeth City Middle School and River Road Middle School.