Two serve as Bearers of the Mace for 154th Commencement

0
239 Views
Warning: json_decode() expects parameter 1 to be string, object given in /srv/users/serverpilot/apps/ecsunewsroom/public/wp-content/plugins/posts-social-shares-count/classes/share.count.php on line 66
0
Shares 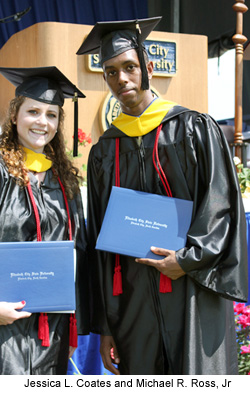 Elizabeth City State University’s 154th Commencement Ceremony brought hundreds of family, friends and supporters to Roebuck Stadium to congratulate 245 undergraduate and 15 graduate students who graduated with degrees on Saturday, May 5. Students Jessica L. Coates and Michael R. Ross served as Bearers of the Mace, a privilege reserved for the non-transfer graduating senior who has the highest cumulative grade point average. Both graduated from ECSU with a 4.0 grade point average. Additionally, both are local students who graduated from local high schools. Coates, a resident of Elizabeth City, graduated from Pasquotank County High School. Ross, a resident of Hertford, N.C., graduated from Perquimans County High School. While both were honored to lead the long line of graduating students into the ceremony, they admitted becoming Bearer of the Mace was not their goal. They simply wanted to perform as best they could as undergraduates. Coates earned a bachelor of science degree in education, with a concentration in elementary education and looks forward to completing her dream of becoming a teacher. &quotThis is an honor I never expected to receive,&quot she said. &quotHowever, it is a great honor to be Bearer of the Mace. I have worked extremely hard to maintain my 4.0 grade point average. There were many long nights of studying, reading and practicing,&quot Coates said. &quotMy goal was to achieve and maintain the highest standards possible. &quotThis honor was accomplished not only with the help of the faculty of ECSU, but also with the help of God, family and friends. I have always wanted to be a teacher ever since I was a little girl. I absolutely love children and could not imagine doing anything else with my life,&quot Coates said. Ross earned a bachelor of science degree in physics. He also earned enough credits to minor in biology and chemistry. He plans to have a career as a medical professional. When reflecting on his four years at ECSU, Ross said he appreciated the small class sizes and attentive professors in the ECSU School of Mathematics, Science and Technology. He said several professors served not only as teachers and mentors, but almost as extended family members offering good advice for future pursuits. He credited his advisor, Dr. A. Victor Adedeji, and Dr. Althea Bluiett, both assistant professors in the Department of Chemistry, Geology and Physics, with personalizing the rigorous academic classes, which helped him to focus and pursue his career goals. &quotI really liked the challenge of physics. I was the only senior majoring in physics so I grew close to my advisors who knew what I wanted to do after graduation-earn a certificate in medical dosimetry at the Roswell Park Cancer Institute. I completed an interview in March for the one-year certificate program and expect to begin my program in Buffalo, N.Y., soon.&quot Ross, like Coates, commuted to campus for his classes. In most cases, he took 18 credit hours of classes each semester while earning all As. He is proud to leave ECSU debt free with the UNC Campus Scholarship and a scholarship from the State Employees Credit Union Foundation covering the costs of his college expenses. Now that he has completed his degree program, he is confident other determined students can benefit from choosing ECSU. &quotThe math and physics departments are strong. One good thing is you are almost guaranteed an internship. The professors inform students about internships and some of those internships pay really well,&quot Ross said. &quotWhen you are in high school, you can get caught up in the idea of going to a university with a big name. I came here to save money and it feels really good to graduate with no debt.&quot He, like most graduates, shared Commencement with family and friends who hold special places in their hearts and lives. &quotI drove to Maryland to pick up my grandmother who will be 90 in August,&quot Ross said. &quotI don’t dwell on being Bearer of the Mace. I knew what I had to do, and I did it.&quot

Two serve as Bearers of the Mace for 154th Commencement