0
618 Views
Warning: json_decode() expects parameter 1 to be string, object given in /srv/users/serverpilot/apps/ecsunewsroom/public/wp-content/plugins/posts-social-shares-count/classes/share.count.php on line 66
0
Shares 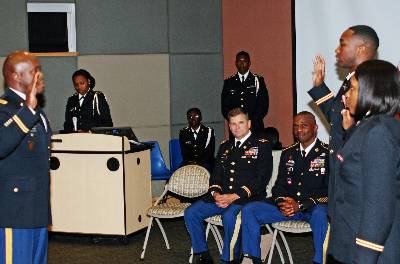 On Friday May 12 in the second floor auditorium at the Ridley Student Center family and friends of the commissioned officers gathered for the commissioning officiated by ECSU alum Col. Marvin Thorton.

Thorton a 1990 graduate and Elizabeth City native is currently serving on the Joint Staff as the Chief of Logistics Operations and Policy at the Pentagon. As an officer in the Army Thorton reminded the newly commissioned officers that they are now and always will be officers and must carry themselves as such. As Viking alumni Thorton also encouraged the graduates to remain loyal to their school and to future Vikings.

Being an officer in the military he said is “an obligation” 24-hours a day seven days a week.

“In or out of your uniform you are an officer representing your country 24-hours a day. Act accordingly” Thorton said.

And be loyal to your school he told them. Bring back to ECSU the spirit and encouragement they received as students and help future generations succeed.

Ferguson is a native of Elizabeth City. He joined the ROTC program in spring 2014. He graduated with a degree in social work with a minor in military science.

Ferguson interned as a guidance counselor at River Road Middle School during the 2016-2017 school year. After working as support staff for the Cadet Summer Training program Ferguson will attend the First Artillery Officer Leadership course at Fort Sill Oklahoma.

Hicks is from Newport News Virginia. She transferred to ECSU in spring 2015.

In 2013 she joined the Virginia National Guard. She specialized at the Signal AIT School graduating in the top 15 percent of her class.

She is a member of the National Society of Leadership and Success the Computer Science Pi Byte Club and the ECSU Viking Volunteer Corps. Hicks graduated with a degree in computer science with a concentration in information systems. 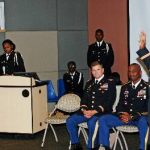