0
194 Views
Warning: json_decode() expects parameter 1 to be string, object given in /srv/users/serverpilot/apps/ecsunewsroom/public/wp-content/plugins/posts-social-shares-count/classes/share.count.php on line 66
0
Shares 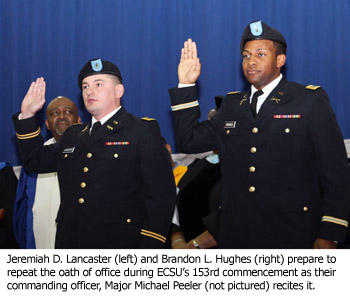 The Department of Military Science held its fall commissioning ceremony on December 9 in the Mary Albritton Douglas Auditorium of the Ridley Student Complex. Colonel Mechelle B. Hale, a 1988 alumna, was the speaker. Two cadets were commissioned as 2nd Lt. in the U.S. Army:

Col. Mechelle B. Hale, a native of Wilson, N.C. and an alumnus of ECSU earned a B.S. degree from the university in 1988. Hale holds a master’s degree in Management from Troy State University and a master’s degree in National Security and Strategic Studies from the Naval War College. Her awards include the Defense Meritorious Service Medal, Meritorious Service Medal with Silver Oak Leaf, National Defense Service Medal, British Airborne Wings and many more. She received the 2010 ECSU Chancellor’s Legacy Award, many other awards for over 23 years of outstanding service in the Army.&ampnbsp She is a lifetime member of Delta Sigma Theta Sorority.