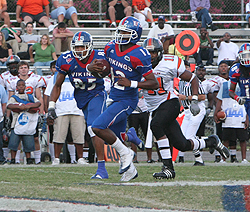 The Elizabeth City State University Vikings, led by Head Coach Waverly Tillar, finished the season with a 7-3 overall record and found themselves in the midst of a three-way tie-breaker for a chance at the Eastern Divisional title. The Tuskegee University Golden Tigers, led by Head Coach Willie Slater, won their fourth consecutive SIAC Championship, while holding an 8-2 overall record with one regular season game remaining. TU is currently ranked #14 in the American Football Coaches Association (AFCA) poll and #3 in the latest Sheridan Broadcasting Network (SBN) poll. This will mark Tuskegee’s eighth Pioneer Bowl appearance while Elizabeth City State will be making their first.

The Central Intercollegiate Athletic Association (CIAA), founded in 1912, is made up of 11 historically black colleges and universities situated along the Eastern seaboard. For conference information please visit www. TheCIAA.com.

Tune into WRVS-FM 89.9 for a live broadcast of the Pioneer Bowl! You can also listen online here.