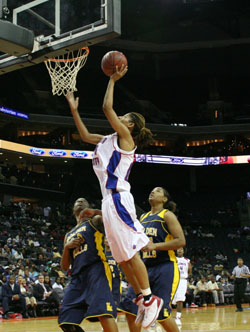 Celeste Trahan has garnered her second post season All-America honor as she was voted to the Division II Daktronics All-America Second Team as voted by Division II Sports Information Directors. Trahan, who earlier was voted to the 2007 NCAA Division II Kodak/WBCA All-America Basketball Team, moves up one a slot on the Daktronics Team from her Third Team honor last season. The 2007 CIAA Player of the Year led the conference in scoring and rebounding and guided the Lady Vikings to their first ever NCAA post season appearance. She is the only member from the CIAA represented on both All-America teams. She also owns the honor as the only woman in ECSU history to be tabbed as an All-American and the only to eclipse 1,000 rebounds in her career. For more information on ECSU Athletics, visit www.ecsuvikings.com.