0
560 Views
Warning: json_decode() expects parameter 1 to be string, object given in /srv/users/serverpilot/apps/ecsunewsroom/public/wp-content/plugins/posts-social-shares-count/classes/share.count.php on line 66
0
Shares 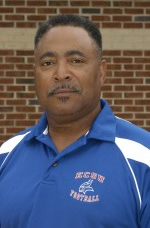 ELIZABETH CITY, NC-Elizabeth City State University Head Football Coach Waverly Tillar has been named the 2006 CIAA Coach of the year. After being predicted to finish next to last in the CIAA Eastern Division, Tillar led the Vikings to the best record in school history (9-1) and went undefeated in conference play. Most significantly the Vikings are headed to their first CIAA Championship Game since 1971. Named CIAA Coach of the Week three times this season, Tillar and the Vikings have delivered on this season’s motto &quotWorking Hard for the Big Turnaround.&quot ECSU has received numerous accolades this season including a #4 ranking in the NCAA Southeast Region and they are currently ranked 21st in the AFCA Division II Coaches Poll. The Vikings will take on North Carolina Central University at O’Kelly Riddick Stadium on Saturday November 11th at 1:00pm. For more information on ECSU Athletics, visit www.ecsuvikings.com.