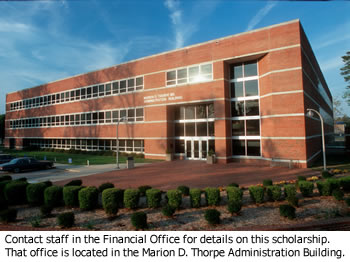 University of North Carolina President Thomas W. Ross recently announced that the Thurgood Marshall College Fund (TMCF) will join efforts to support the retention and graduation of students at Elizabeth City State University. TCMF has pledged $150,000 to provide scholarships for eligible students who are in their junior or senior year and need financial support to graduate. To qualify as a TMCF Scholar, students must have a 3.0 or higher grade-point average and be in good standing at the institution. In making the announcement, Ross said: &quotIn recent months we’ve been working with Chancellor (Charles) Becton and his leadership team to help ECSU address enrollment declines and significant state budget reductions,&quot said Ross. &quotJohnny C. Taylor, Jr., President and CEO of the Thurgood Marshall Fund, was one of the first partners to agree to provide financial assistance to ECSU students, many of whom are low-income and the first in their families to attend college. Despite our University’s commitment to low tuition, these students face real challenges paying for college.&quot Taylor underscored TMCF’s commitment to help ECSU students overcome financial barriers to college completion, saying, &quotDue to new loan eligibility requirements from the Department of Education and private financial institutions, many of our students are unable to rely on loans they may have received in the past. These scholarships will help fill the gap to ensure that students complete their college educations.&quot Students meeting TMCF criteria must apply directly to TMCF for scholarship funds, which will be available beginning March 2014 through the spring 2015 semester. The TMCF Scholars program will be jointly funded by TMCF and North Carolina-based Lowe’s. Through its Access Fund, Lowe’s has demonstrated strong support for public historically black colleges and universities(HBCUs). ECSU Chancellor Becton said of the pledge: &quotThe entire Elizabeth City State University community thanks the Thurgood Marshall College Fund for allocating funds to support retention efforts at ECSU. We are the premier 4-year regional education provider for one of the most geographically challenging and economically disadvantaged regions in the state. This funding from TMCF will help us retain top quality students and ensure that those in our region who want to pursue and continue higher education can afford to make their educational goals a reality.&quot TMCF is named for the U.S. Supreme Court’s first African-American Justice. Established in 1987, TMCF supports and represents nearly 300,000 students attending its 47 member schools that include public HBCUs, medical schools and law schools. Through its scholarships and programs, TMCF plays a key role in preparing the leaders of tomorrow. For more information about TMCF and its initiatives, visit www.thurgoodmarshallcollegefund.org. For more information about Thurgood Marshall College Fund at Elizabeth City State University, contact Mrs. Makitta McLean Whitehurst, 252-335-3355, mmmclean@ecsu.edu The oldest public university in the nation, the University of North Carolina enrolls more than 220,000 students and encompasses all 16 of North Carolina’s public institutions that grant baccalaureate degrees, as well as the NC School of Science and Mathematics, the nation’s first public residential high school for gifted students. UNC campuses support a broad array of distinguished liberal-arts programs, two medical schools and one teaching hospital, two law schools, a veterinary school, a school of pharmacy, 11 nursing programs, 15 schools of education, three schools of engineering, and a specialized school for performing artists. The UNC Center for Public Television, with its 11-station statewide broadcast network, is also under the University umbrella.