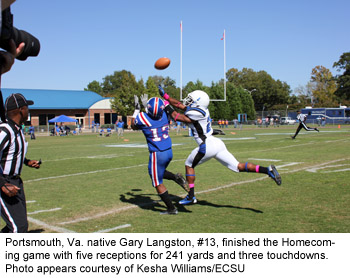 Three members of the Elizabeth City State University football team have been voted as CIAA Players of the Week as released by the conference office Monday afternoon. Nigel Rios, Gary Langston, Michael Williams and have all been recognized for their individual performances in the Vikings’ 47-21 Homecoming win over Chowan University. Nigel Rios has been tabbed as the CIAA Defensive Back of the Week for the third time this season. In Saturday’s win over the Hawks, Rios finished with nine tackles (eight solo, one assisted) including two tackles for a loss of nine yards, a forced fumble, a fumble recovery and a pass breakup. He gave the Vikings the lead for good in the first quarter with a 54 yard fumble returned for a touchdown. Portsmouth, VA native Gary Langston has been named CIAA Receiver of the Week after a career day on Saturday, the best outing by a Viking receiver since 2008. He finished the day with five receptions for 241 yards and three touchdowns. His touchdown catches went for 85 yards, 78 yards and 22 yards. Finally Michael Williams has been named the CIAA Linebacker of the Week. Williams had his best game in a Viking uniform in Saturday’s win as he led the team with a game high 13 tackles (eight solo, five assisted) including a sack for a loss of six yards, two forced fumbles and two quarterback hurries. ECSU (5-3, CIAA 4-1) will host their final home game of the season on Saturday, October 27th when they play host to Virginia Union University for Senior Day 2012. Game time is scheduled for 1 pm. For more information on ECSU Athletics, visit www.ecsuvikings.com and follow on Twitter @ECSUVikings.