One of the great legacies of any university is its sports program and the men and women who strive to achieve prominence in their chosen game. For Elizabeth City State University, there are a number of outstanding athletes who have come and gone over the years, and during Homecoming 2017, three were recognized during the annual Sports Hall of Fame Induction Ceremony and Banquet.

Inside K.E. White, on Friday, Oct. 13, three Viking athletes were honored for their commitment to their team, their sport, and the excellence they brought to the games: Deanna Price, Celeste Trahan-Davis, and the late John C. Evans, Jr., were all honored by family and friends.

Deanna Price graduated from ECSU in 2007 after four stellar years playing for the Lady Vikings basketball team. Price, who was introduced by her mother, Luella Price, was described as a natural with the ball.

During her time as a member of the Lady Vikings team, Price was named to the All-CIAA team, the CIAA Tournament team, and was named CIAA Defensive Player of the year two years in a row. She was also ranked nationally in the NCAA Division II for steals, and is a member of the “1000-point club.”

After leaving ECSU, Price would go on to play two seasons of semi-professional basketball. Today she is a coach and teacher.

Another Lady Viking was honored during the annual fete, celebrating a player with many firsts, Celeste Trahan-Davis. A member of the Class of 2008, Trahan-Davis distinguished herself as the first female player in ECSU history to be named Player of the Year, and the first woman to have her jersey retired. It hangs in the rafters of the Robert L. Vaughan Center.

Trahan-Davis would earn numerous honors for her work on the court, including being named CIAA Player of the Year 18 times throughout her career as a Lady Viking. She has since gone on to play professionally in Europe, and his currently playing for Royal Castor’s Braine in Belgium.

Because Trahan-Davis is currently playing through her European season, she accepted her induction via a video message, thanking ECSU for the experience and opportunity to excel in the game she loves.

The final inductee this year is The Bishop Dr. John C. Evans, Jr., who passed away shortly before the induction into the Sports Hall of Fame. Accepting for Evans was his sister, Dr. Susan E. Powell.

Evans performance on the Hallsboro, North Carolina High School football field earned him a scholarship to ECSU, and a place on the Viking team. He was not only an outstanding football player, but also a spiritual leader in the locker room, bringing his ministry to his fellow Vikings, according to Powell.

Evans began his ministry while a student, giving his first sermon at the Mt. Hebron A.M.E. Zion church at the age of 19. After graduating from ECSU in 1981 with a degree in criminal justice, he would go on to earn a Masters of Divinity degree from Hood Theological Seminary, where he would later be awarded an Honorary Doctorate.

The evening was emceed by WRVS-FM, 89.9 “Voice of the Vikings,” Randy Jones, and attended by alumni and students. 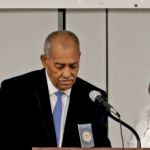