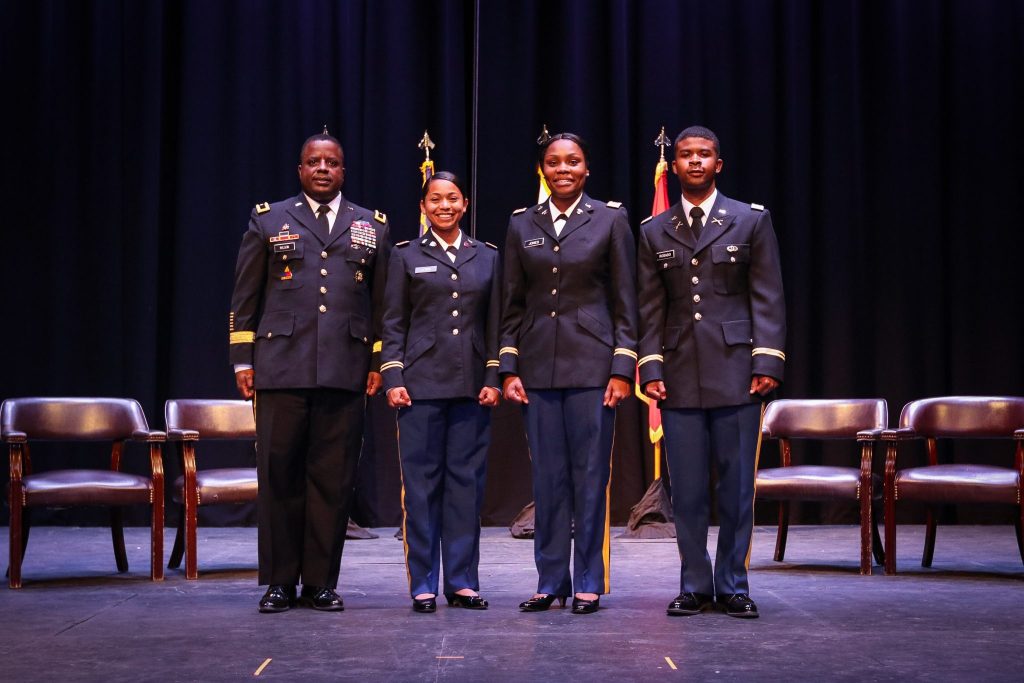 Each officer took the oath of office, received their bars from family members, and offered remarks to an audience of more than 50 people. Efrain Rosado, after receiving his first salute from his grandfather, a retired army first sergeant during an emotional exchange, explained that he had not been on a good path at one time.

Rosado offered apologies to his family for behavior that, he said, might have led him toward a different future. But, Rosado was quick to point out, ECSU saw in him an opportunity for a leader, and a success.

“They took a chance on me with a scholarship,” he said.

Rosado will be an infantry officer, stationed at Ft. Benning, Georgia.

Lt. Rodnika Jones also offered an emotional thank you to family, but not for being at the ceremony. Rather, she thanked them for caring for her mother, who is ill and could not attend the ceremony.

“Thank you for looking after her and getting her where she needed to be so I could be here,” she said.

Jones will be an officer in the Quartermaster Corps, stationed at Fort Bragg, North Carolina.

Lt. Jocelyn Lewis, who will be an officer in the Adjutant General’s Corps, stationed in Fort Hood, Texas, was given the oath of office by her father, a major in the U.S. Marine Corps.

“I am appreciative of everyone who has contributed to this accomplishment,” she said.

The keynote speaker for the event was Brig. Gen David Wilson. Wilson, a graduate of The Citadel and an officer since 1991, is a veteran of the Iraq war. His message to the newly commissioned officers was to follow the four building blocks of success:

“We set standards to direct ourselves,” he said of self-discipline.

“It’s what makes people want to come to work each day,” he said.

“The U.S. Army is renowned for its education system,” he said.

Wilson said if an officer spends 20 years in the Army, he or she will have spent 15 percent of that time receiving an education.

“People will look to you,” he said. “You will coach and mentor a team.”

During the 166th Commencement ceremony on Saturday, May 12, Lt. Col. Judy Anthony, director of the military sciences program, will again administer the oath of office to the newly commissioned officers. 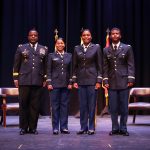