Each year the Honor’s Convocation draws Elizabeth City State University’s top students to the stage to accept over 50 awards and certificates in recognition of their scholarly achievements in the university’s 28 bachelor’s degree programs. The program begins by acknowledging recipients of the Chancellor’s Distinguished Emblem Award which is reserved for graduating seniors who have maintained a 3.75 grade point average (GPA) or higher for six consecutive semesters at ECSU.

This year’s recipients are Donisha Acheampong a social work major from Jacksonville N.C. Devin Cherry a business administration major from Elizabeth City N.C. and Christin Smith a communication studies major from Wilson N.C. In addition Acheampoing was recognized for academic honors in social work and Smith received the highest achievement awards in Language Literature and Communication.

Graduating with honors was a goal of Acheampong’s since she arrived here as a freshman. Achieving that goal would not only make her proud but family and friends who have supported her over the years. Then came the announcement in late spring that she was one of the recipients of the Chancellor’s Distinguished Emblem Award.

“I was ecstatic almost lost for words because I couldn’t believe I would be receiving such a prestigious award. I saw that only three people were receiving the award so I felt such an honor that the school would recognize me” Acheampong recalled.

Dr. Velma Brown Blackmon a recently retired professor of communications and the former director of the University Honors Program (2004 – 2015) was the speaker for the occasion. She assured the student awardees in the audience they should cherish this convocation because it distinguishes them for obtaining the university’s superior awards. In essence they were recognized for being smart. She illuminated “smart” as an acronym —sensitive motivated adventurous resilient and transformational.

“Transformational means to share your knowledge. No I don’t mean to beat people over the head with your brilliance but to provide the knowledge that will assist those who will come behind you to make their way” Blackmon said.

“Do not let the knowledge you have accrued over the years go to the grave with you be a mentor someone who recognizes the need to share information and provides it to other smart people. Because smart people will seek mentors and accept mentorship.”

“Honorees let being S-M-A-R-T transport you from this stage of your life to the one you are destined to lead.” 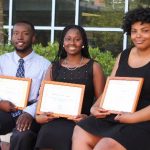