Three begin new terms with the ECSU Board of Trustees

0
233 Views
Warning: json_decode() expects parameter 1 to be string, object given in /srv/users/serverpilot/apps/ecsunewsroom/public/wp-content/plugins/posts-social-shares-count/classes/share.count.php on line 66
0
Shares 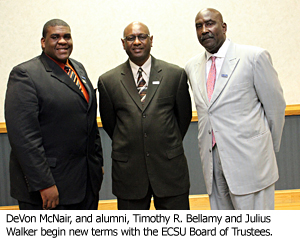 Three new members took the oath of office and began new terms with the ECSU Board of Trustees at the September quarterly board meeting.&ampnbsp Two graduated from the university and one is beginning his term as the students’ representative.

DeVon McNair, a senior from Kinston N.C., begins a one-year term as an ex officio member of the board. He is president of the Student Government Association. McNair promised that he and his fellow SGA officers will work diligently on key areas: student success, school spirit and alumni relations. McNair said everyone here has had a part in the growth of the university and its recognition.

&quotI am so proud of this university and all that it has been in the past and all that it strives to be in the future,&quot Mc Nair said. &quotStudent Success or in other words academics, will be the driving force behind many of the things that the Student Government will do this year.&quot

&quotIt is important that SGA help strengthen the bond between alumni and the university. SGA will work side by side with Institutional Advancement and Alumni Relations on different strategies and plans that will successfully encourage graduates of this fine university to give back to their alma mater.&quot

Two alumni also took the oath of office:&ampnbsp Timothy R. Bellamy, a 1981 ECSU graduate, and Julius Walker, an ECSU graduate of the Class of 1967.

Bellamy’s awards are numerous and include the Greensboro Police Officer of the Year for 1988 and 1989 and the U.S. Marshals Service Joint Fugitive Task Force Commitment to Service Award. He is a member of Phi Beta Sigma Fraternity Inc. and has been active with the National Forum for Black Public Administrators, the National Association of Black Law Enforcement Executives, Board of Directors for the Salvation Army (Greensboro) and the Rotary Club of Greensboro.

Walker has more than 30 years of experience as an educator.&ampnbsp He retired in 2009 as the superintendent of Washington County (N.C.) Schools, where he served as assistant superintendent of operations from 1996 to 2001.

Walker has served with numerous civic organizations, including the Martin/Washington/Tyrell Counties Smart Start Board, Washington County Planning Board, the Juvenile Crime Prevention Council and the NAACP (Washington County).&ampnbsp He also served as a member of the ECSU Board of Visitors, the ECSU Viking Varsity Club and the National Alumni Association (ECSU), where he is a lifetime member and a former member of the board.

Three begin new terms with the ECSU Board of Trustees