0
484 Views
Warning: json_decode() expects parameter 1 to be string, object given in /srv/users/serverpilot/apps/ecsunewsroom/public/wp-content/plugins/posts-social-shares-count/classes/share.count.php on line 66
0
Shares 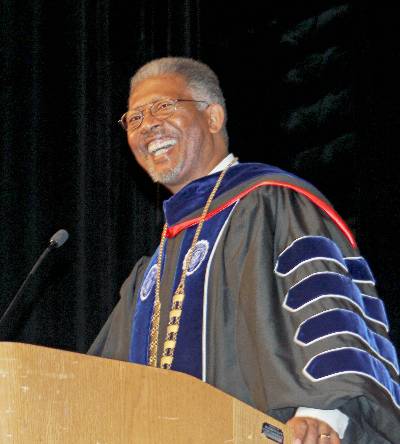 The auditorium of the Mickey L. Burnim Fine Arts Center on the campus of Elizabeth City State University was packed Friday March 10 when Chancellor Thomas E.H. Conway Jr. was officially installed as the sixth chancellor and 11th chief executive officer of the historic university.

Presided over by UNC System President Margaret Spellings the ceremony greeted Chancellor Conway with encouraging words and much support by local and state dignitaries family faculty staff students and colleagues.

“Dr. Conway is taking pride in a historic moment when ECSU faces challenges” said Pres. Spellings in her introductory speech. “He is the right leader for renewal.”

Pres. Spellings invoked the memory of ECSU founder Hugh Cale. One of the state’s first African American legislators Cale founded what was then known as the State Normal School in 1891.

It was an institution whose mission was to educate African American teachers and create social mobility for those who were seeking a better life through education. That was 126 years ago and while now a part of the UNC system and offering numerous degree programs the core mission of bringing education to those who want it has not changed.

“Thomas Conway has spent his entire life dedicated to the ideal of Hugh Cale that all should have access to education” said Pres. Spellings.

A number of elected officials celebrated Chancellor Conway’s installation as well as Louis Bissette chairman of the UNC Board of Governors.

“All of us on the board are proud of this historic installation and are excited about what lies ahead” said Bissette.

“Rarely have we welcomed a chancellor that is so well matched to an institution” he said.

Chancellor Conway understanding the history of ECSU presented in his speech a series of quotes from previous chancellors. Those quotes each inspirational and providing a glimpse into the philosophy of each man concluded with what he said should stand as his contribution to this gallery of wisdom.

“The challenge we face today is as complex as the age in which we boldly go forward. … With God’s grace we learn and make a positive difference” he said.

Prior to joining ECSU Chancellor Conway was appointed in 2008 to serve as Vice Chancellor and Chief of Staff at Fayetteville State University.

He came to Fayetteville State University after his 32 year tenure at North Carolina State University where he served as dean of Undergraduate Academic Programs. His responsibilities included increasing the quality of academic advising afforded to all students the interpretation review and revision of academic policy for the University and support for efforts by academic programs to develop balanced assessment-based environments for critical decision making. In addition Dr. Conway a veteran administrator of student success programs was charged with developing an institutional framework for NC State’s student success efforts.

Dr. Conway holds an undergraduate degree in agricultural education (1971) and a master’s degree in guidance and counseling (1976) from NC A&ampT State University and earned a Ph.D. in counselor education from NC State in 1994.

A native of Louisburg North Carolina he is married to the former Mychele Jenkins of Hollywood Florida They have two adult children. 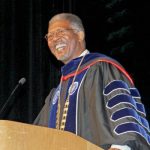