The University Players present: ” Knock Me a Kiss”

0
176 Views
Warning: json_decode() expects parameter 1 to be string, object given in /srv/users/serverpilot/apps/ecsunewsroom/public/wp-content/plugins/posts-social-shares-count/classes/share.count.php on line 66
0
Shares 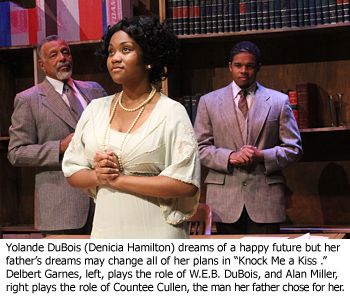 Kesha Williams
October 24, 2011 The University Players, Elizabeth City State University’s student theatrical group, will present &quotKnock Me a Kiss,&quot a drama set in 1928 that illuminates the emotions of a woman caught in a love triangle.Written by Charles Smith, the play places the audience in the middle of the Harlem Renaissance with a noted scholar, author and leader in the community who is confident he has identified the &quotright&quot man — an accomplished poet –for his beautiful daughter. But the daughter has fallen for a jazz band leader, a figure far from the social status her father deems &quotnecessary&quot for her. Her devotion to her father eventually influences her decision to marry the poet.According to reviewers, &quotKnock Me a Kiss&quot is inspired by actual events surrounding the 1928 marriage of Yolande DuBois, daughter of the distinguished W.E.B. DuBois, to poet Countee Cullen. Associate Professor Billicia C. Hines, who is directing the production at ECSU, says it is the kind of play that her young cast and audience can grasp. After all, who hasn’t found himself or herself teetering between pleasing a parent and following his or her own heart?Frank Garnes, chairman of the ECSU Department of Psychology, plays the role of W.E.B DuBois. He is the most experienced member of the cast. He will share the auditorium stage at the Mickey L. Burnim Fine Arts Center with one student (Alan Miller) who hopes the production will give him additional experience to enter a graduate degree program in theater. The remaining cast members – all students — also are talented young adults who are meeting one of the tallest challenges they’ve taken on at ECSU — acting before an audience of their peers.Denicia Hamilton, a sophomore majoring in music performance, stars as Yolande. Alan Miller, a senior majoring in communications studies, stars as Countee Cullen. Shenice Evans, a senior majoring in education, stars as Nina DuBois, Yolande’s mother. When Garnes, 68, thinks of the role of W.E.B. Du Bois, he sees an opportunity to challenge himself beyond the comical characters he has played in the past. &quotThis is a role that calls for some humor and some seriousness,&quot he said. &quotI’m trying to pull this off carefully because (DuBois) is one of the most respected men of his era — the founder of the NAACP.&quotGarnes also sees this as a different way to impact the lives of the university’s students. &quotWe, as faculty, need to find new ways to get involved. There is life outside the classroom,&quot he said. &quotThis type of involvement certainly would bring out more people from the university to see a locally produced play.&quotHines said students involved in the production are learning a great deal about the Harlem Renaissance. Music, fashion and family trends from the era dictate how the play unfolds.She and Garnes agree that theater at this level opens the doors for budding performers and experienced ones alike. It gives students a glimpse into the magical world of theater from the ground up. &quotActors and actresses at this level of theater are involved in setting up the stage, arranging the props and developing camaraderie from working together,&quot Garnes said.He noted that his personal goal is to become an all-around actor who easily fits in with other actors, directors and crew members of all ages. &quotWhen I act, I put on an additional hat. It gives me a chance to let my hair down, to become someone else, this character on the page of the script,&quot he said. &quotAs you get older, you may have to spend more time learning the lines, practicing them over and over. But the experience still is a good one.&quot&quotKnock Me a Kiss&quot will be held Oct. 27 through 29 at 8 p.m. in the Floyd L Robinson Auditorium at the Mickey L. Burnim Fine Arts Center on the ECSU campus. Tickets are $8 general admission and $5 for students. Tickets may be purchased at the door. Because of the subject matter, the play may not be suitable for children under age 13. For more information, contact Billicia Hines at (252) 335-3436.

The University Players present: ” Knock Me a Kiss”