0
221 Views
Warning: json_decode() expects parameter 1 to be string, object given in /srv/users/serverpilot/apps/ecsunewsroom/public/wp-content/plugins/posts-social-shares-count/classes/share.count.php on line 66
0
Shares 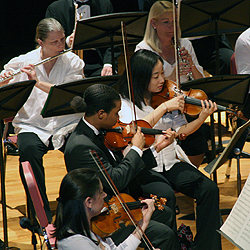 The ECSU Albemarle Symphony Orchestra will hold its fall concert at 3 p.m. on November 15 at the K.E White Graduate and Continuing Education Center. The concert is free.

Concert selections will include works by three well-known composers: Alfred Reed, one of America’s most prolific and frequently performed composers, with more than two hundred published works for concert band, wind ensemble, orchestra, chorus, and chamber ensemble Camille Saint-Saens, a French composer and co-founder of the Societe Nationale de Musique, who composed of over 300 musical works, including symphonic poems such as Danse Macabre and operas such as Samson et Dalila and Gustav Holst, a British composer known for his choral part-songs, song cycles, operas and orchestral pieces, such as &quotThe Planets.&quot