0
497 Views
Warning: json_decode() expects parameter 1 to be string, object given in /srv/users/serverpilot/apps/ecsunewsroom/public/wp-content/plugins/posts-social-shares-count/classes/share.count.php on line 66
0
Shares 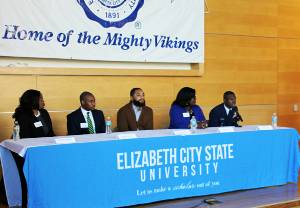 Elizabeth City State University students had an opportunity to get a glimpse at what their future may look like Tuesday, October 25, 2016, when five ECSU graduates spoke at the Young Alumni Emerging Leaders Forum.

Hosted by the ECSU Office of Alumni Relations, and emceed by its director, Barbara Sutton, the event was scheduled as a part of an exciting list of Homecoming 2016 events, five successful young alums sat in on a panel to discuss not only their experience in the professional world, but also how ECSU shaped their lives.

Whidbee, who appeared alongside his sister, 2013 graduate Brittany Whidbee, is a pharmacist overseeing six Wal-Mart pharmacies in the region. He says he was prepared to attend East Carolina University as a broadcast journalism major when a former ECSU chancellor challenged him to consider the Elizabeth City campus.

Whidbee recalled that he was told that ECSU would lead him to, “a career anywhere in the world,” but with a lower tuition while receiving a quality education. And once the Elizabeth City native saw the “close knit” ECSU family firsthand, he realized that this would be home.

“You have to center yourself with all the right people,” said Whidbee.

Tajima Johnson Lassiter, ECSU Class of 1998, also grew up in Elizabeth City. And while she says she grew up in an economically challenged environment, Lassiter was expected to attend school. ECSU not only gave her the opportunity to afford a university education, it also gave her an academically challenging experience that would shape her future.

“Once I got here I was challenged, supported,” said Lassiter. “I was pushed to be the best I could be.”

Lassiter is now an English teacher working at Camden County High School, across the Pasquotank River from her alma mater. She says her experience at ECSU has given her the opportunity to excel and be a part of national committees, shaping the future of education.

Brittany Whidbee says she too was challenged and supported during her time at ECSU. Whidbee says her time as a student prepared her for a future as a law school student by bringing her out of her shell.

“It is the type of place,” she said of ECSU, “that will know the potential in you as a student, and mold you.”