0
587 Views
Warning: json_decode() expects parameter 1 to be string, object given in /srv/users/serverpilot/apps/ecsunewsroom/public/wp-content/plugins/posts-social-shares-count/classes/share.count.php on line 66
0
Shares 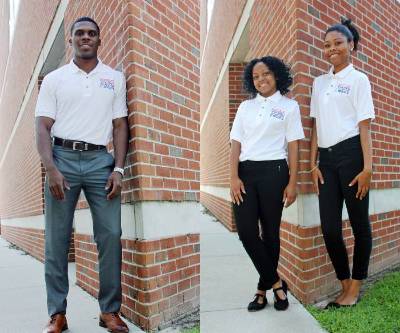 Volunteering is the Viking way and ever since the Viking Volunteer Corps was officially launched in August, students have been signing up to do their part. According to, LaQuisha Mayfield, admissions counselor and one of several volunteer coordinators, 33 Elizabeth City State University students have signed on to become volunteers.

Some of the volunteer opportunities include delivery of meals to elderly shut-ins through Meals on Wheels, being a Boys and Girls Club mentor, working with one several non-profits in Elizabeth City or working on campus assisting with the Chancellor’s Color Run or Homecoming activities.

Sh’Nautica Battle, a junior from Rocky Mount, North Carolina, says she’s been volunteering since she was a high school student. She looks forward to being a part of the campus and greater Elizabeth City area communities.

“I feel like it’s important to be active in this community, especially since I go to school here,” said Battle.

Battle will be volunteering her time with the American Red Cross, and mentoring at risk high school and middle school students, as well as on-campus activities such as the Chancellor’s Color Run.

Shayla Witcher is a sophomore from Prince George County, Maryland. She says staying active as a volunteer helps her stay positive, and she enjoys helping people.

“I also enjoy showing pride in our institution,” she says.

Witcher will be a mentor to area elementary and middle school students, a volunteer at the Elizabeth City Area Chamber of Commerce, and working at the Chancellor’s Color Run.

For senior Kendale Leary, a native of Edenton, North Carolina, it’s important to represent ECSU, and, “To give back to the community.” Leary will be volunteering as a mentor at the Boys and Girls Club because growing up, the institution made a difference in his life.

According to the Viking Volunteer Corps coordinator, Russ Haddad, 60 Elizabeth City State University faculty and staff showed up in the Chancellor’s Board Room on the third Floor of the Thorpe Administration building in August to sign up for one of 16 volunteer opportunities throughout the surrounding community and on campus.

The Viking Volunteer Corps was created last semester when Haddad, Dennis Leary and Felicia Brown met to discuss ways ECSU could get out into the community and bring the Viking experience to area residents. With so many faculty, staff, and students across campus, all that was needed was a central organization to bring them together and get them out into the community.

And so the Viking Volunteer Corps was born.

“This is a great opportunity for the ECSU community to share our Viking spirit and make a difference throughout the region,” said Haddad.

To distinguish themselves when volunteering, each Viking Volunteer Corps member wears a white polo shirt with an embroidered corps logo on the chest. Whenever people see that shirt, they will know ECSU is present, making a difference in the community.

If you’re a student or faculty and staff member, and you’re interested in being a Viking Volunteer, contact Russ Haddad at 252-335-3373, or email him at rghaddad@ecsu.edu.