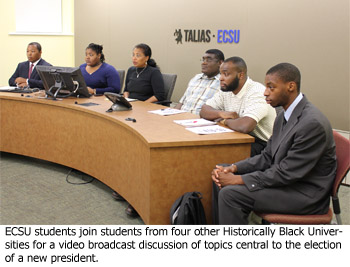 Six Elizabeth City State University students and two faculty joined students and faculty from four additional Historically Black Universities for an Oct. 22 discussion of issues central to the presidential election. The goal was for students to anticipate the topics that would not only be debated by the two candidates for president of the United States, but topics that are central to voters. Margery Coulson-Clark and Dr. Kwabena Boansi gathered students majoring in political science and history for the session held in ECSU’s Moore Hall. The group was linked via live video broadcast with participants at Fayetteville State University, North Carolina A &amp T State University, Winston-Salem State University and North Carolina Central University. Students identified the economy, health care, the rise of China and the fall of Libya as central to the presidential debates. They also said economic recovery, the availability of jobs, and health care are topics of greatest concern to voters. ECSU student participants were Andy Reid, Weldon Jones, Tavion Garner, Tyler Christian and Justin Wendell. ECSU is one of five Historically Black Colleges and Universities benefiting from a $2 million Broadband Technology Opportunities Program grant awarded to North Carolina Central University’s School of Law. The program, Technology Assisted Legal Instruction and Services (TALIAS), is a live, interactive, videoconference series which originates at the NCCU School of Law and is broadcast to participating host sites such as ECSU. Usually, an attorney leads the discussion and welcomes questions from audience members at each site. On this occasion, the discussion involved students and professors from the participating universities’ history and political science departments.