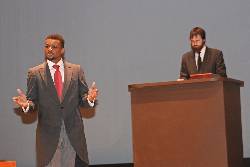 Elizabeth City State University students and staff recall a historic scene from the North Carolina General Assembly. Khaliq Satchell, left, an ECSU junior from Columbia, Md., portrays Hugh Cale, the black representative from Pasquotank County, who sponsored House Bill 383 in the state General Assembly. Matthew Johnson, far right, played the role of another member of the General Assembly that debated in 1891 the need for this proposed normal school. Once passed, that bill created a normal school which would train new teachers of color to work in the common schools of North Carolina and later to educate area pupils. That normal school expanded its student roster and its list of academic programs over the years and it is now known as Elizabeth City State University. The drama is one of a series of events held in celebration of the university’s 125th anniversary. Friday, the university will hold its annual Founders Day convocation and Saturday, the ECSU Foundation Board will hold the university’s ninth Founders Day Scholarship Gala.