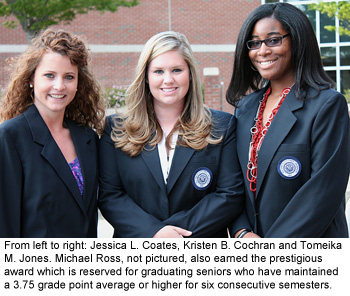 Four students earned the Chancellor’s Distinguished Emblem Award which is reserved for graduating seniors who have maintained a 3.75 grade point average or higher for six consecutive semesters:

Those awards were announced during the Honors Convocation on April 12 in the Floyd L Robinson Auditorium of the Mickey L. Burnim Fine Arts Center.Â Several other students were also recognized at the event including ECSU students now in Who’s Who Among Students in American Universities and Colleges: