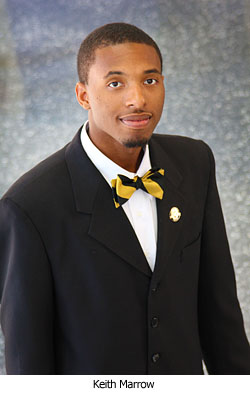 Keith Marrow has a different perspective on the role of college than he had as a freshman. Like most freshmen, he noted the classes he would have to complete in order to earn his bachelor’s degree in Aviation Science from Elizabeth City State University. He later also made room in his schedule for extracurricular activities, including membership in Alpha Phi Alpha fraternity. One day while scanning a bulletin board on campus, he saw an advertisement for the Congress-Bundestag Youth Exchange for Young Professionals. This fellowship, funded by the German Bundestag and U.S. Congress, annually provides 75 American and 75 German young professionals the opportunity to spend one year in the other’s country, studying, working and living with hosts in a cultural immersion program. Marrow was accepted and served as what the agency describes as a Junior Ambassador. It was his first trip abroad for an extended period. It was also the turning point of his view of college as simply a slate of courses completed on a small, northeastern North Carolina campus. For participants of this prestigious program, funds are allocated to cover the costs of roundtrip international airfare, tuition, seminars, insurance, local transportation, housing and food. The goal for Marrow was to interact with the German people, share his culture, learn and experience German culture firsthand. That included learning the native language and developing himself in Aviation Science courses. He also was required to complete an internship. &quotUpon arriving in Germany in August 2011, I knew I was on an adventure I would treasure for the rest of my life. I was immediately immersed into the German culture as I lived with a host family in SaarbrÃ¼cken, Germany,&quot Marrow said. He spent two months in a lovely city on the border of France, where he attended an intensive language school involving German language classes from 8 a.m. to 3 p.m., five days a week. The teachers wouldn’t speak English and the people of the region spoke little or no English. The primary languages spoken were German, French and a local dialect. Slowly, Marrow picked up the language, made friends and learned about the German lifestyle – favorite beverages, foods, market and retail options. From October 2011 to July 2012, he lived in the city of Bremen, Germany, which is located in northern Germany, close to Hamburg and the North Sea. Marrow noticed slight differences in lifestyle and use of language. For example, Marrow found people in southern Germany more receptive to newcomers, friendly and charming than residents of northern Germany. In addition, the southerners spoke more in their own language or dialect as opposed to northerners, who spoke &quotHoch Deutsch&quot or High German or educated German. While adjusting to this new culture, he used Skype and Facebook to maintain communication with his parents and eight siblings in Henderson, N.C. While living in Bremen, he attended Hochschule Bremen, University of Applied Science. Marrow said it was an enlightening view of a German university. Unlike ECSU and many American universities, this university did not house students on campus. &quotI took half of my classes in German and half in English. It was a diverse student body, with students from all over the world attending,&quot Marrow said. &quotThe classes included more labs, where students worked as a team to design a single-engine model aircraft, order and assemble all the necessary parts, and test it in an open field. &quotThe students at this university were very enthused,&quot he continued. &quotMany were attending on scholarship, which was funded by a German airline. Some of them were selected after completing their equivalent of high school.&quot After attending the university, he completed a five-month internship as an aircraft mechanic, working in an aircraft repair service center at a nearby airport. Marrow learned how to maintain and repair Cessna Citation jets and a wide range of turboprop aircraft. Marrow has been flying Cessna 172 aircraft for three years as an Aviation Science student at ECSU. Working as an aircraft mechanic increased his technical knowledge and allowed him to learn German repair techniques. He also discovered interesting differences in the German workplace. &quotWorkers in Germany are entitled to a mid-morning breakfast break, followed by a noon lunch break. Employees are not allowed to work more than 10 hours a day, but they are very productive during work hours,&quot Marrow said. &quotMy overall experience abroad was remarkable. The biggest advantage of living abroad is learning about another culture firsthand and learning more about your own culture from a different perspective,&quot he said. He said his outlook on issues, such as health care, labor laws and politics, has changed since his travels abroad. &quotOverall, I enjoyed my time at the school and met friends that I am still in contact with today.&quot Marrow also visited Berlin, Frankfurt, Paris, the Canary Islands off the coast of Africa, and Luxembourg, while he was overseas. While purely recreational, the excursions inspired Marrow to plan another trip abroad once he returned to North Carolina. He is encouraging other students to consider Congress-Bundestag Youth Exchange for Young Professionals. He is carrying 19 credit hours this semester and moving closer to Commencement. He is scheduled to graduate in December 2013, and he hopes to take another trip abroad before joining the military. As a freshman, he didn’t consider a trip abroad as a way to celebrate his college graduation. After three years at ECSU, he has a new outlook on life. He credits ECSU with broadening his horizons. &quotIt took a lot of courage to complete that fellowship in Germany — to live in another culture for such a long time,&quot Marrow said. &quotThe toughest part of it was missing the American culture during holiday seasons. Now that I’ve done it, I certainly wouldn’t mind traveling abroad again.&quot