0
829 Views
Warning: json_decode() expects parameter 1 to be string, object given in /srv/users/serverpilot/apps/ecsunewsroom/public/wp-content/plugins/posts-social-shares-count/classes/share.count.php on line 66
0
Shares

Each year the MVP Award is given to outstanding ECSU student-athletes. This year’s honorees are:

The Thurlis and Brenda Little Offensive Lineman Award honors the top offensive lineman on the football team. This award is dedicated by former football and wrestling coach and Athletic Director Thurlis Little and his wife Brenda both of whom are ECSU alumni.

This year’s recipient for the Thurlis and Brenda Little Offensive Lineman Award is Brian Wells.

The Thomas L. Caldwell Award is given in honor of the late Thomas L. Caldwell a Professor Emeritus at ECSU. During his 40-year tenure at ECSU Coach Caldwell served as assistant professor of Physical Education and Health Head Baseball and Assistant Football Coach Golf Coach a game he initiated at ECSU in 1955 Head Football Coach Associate Athletic Director and Director of Athletics. In 2006 the field house was dedicated in his honor.

The award was originally instituted by ECSU alums the late Lawrence Alford and the late Benny Hodges.. Since their passing Dr. Claudie Mackey has continued to sponsor the award in Coach Caldwell’s honor.

This year’s recipient of the Thomas L. Caldwell Award is Victor Tabbs.

Sponsored by ECSU alum Gary Stubbins the RL Vaughan Basketball Award is given in honor of Coach Robert Vaughan to two distinguished basketball players (one male one female) as nominated by the head coaches. The award was presented by Coach Vaughan to Jalyn Brown and Shyheid Petteway.

Female and Male Athlete of the Year

Each year a male and female Athlete of the Year is chosen for their dedication to their sport ECSU and their Viking Spirit. This year’s honorees are:

Female Athlete of the Year

Jana’ Boyd was top bowler in the CIAA with an average of 192.97 and is the first ever ECSU bowler to receive the honor.

Male Athlete of the Year

Victor Tabbs was ranked first amongst all CIAA tight ends and sixth overall in receptions with 39 for 639 yards (63.9 yards per game) while averaging 3.9 receptions per contest during his senior year. He also finished the season with three touchdowns and averaged 16.4 yards per catch with the longest tallying 50 yards.

The ECSU athletic team that holds the highest overall team GPA is the Women’s Cross Country with a cumulative GPA of 3.55

And individually Marlee Putnam and Matthew McIntosh received this award. These two student-athletes have the highest GPA for the 2016-17 season.

A history major Putman’s GPA is 4.0. McIntosh is a sports management major with a GPA of 3.8. 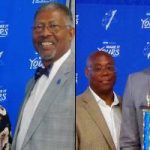