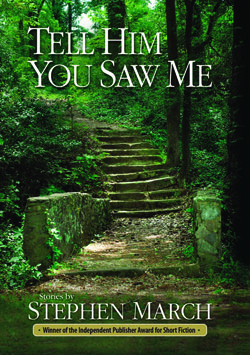 He’s published six books and released two CDs over 26 years. One hit away from stardom, one month shy of retirement Wonder what the future holds. It sounds like the making of a country song. Yet, it well suits Stephen March, a recently retired professor in the ECSU Department of Language Literature and Communication. March, a novelist, short story and song writer whose work is set in the South, spent nearly three decades teaching students creative writing. When he wasn’t teaching, advising students or serving on university committees, he crafted songs and wrote books. The process sometimes took years-after all it’s not easy developing storylines and book characters. &quotWhen you tell a story, a novel has to work artistically. There is craft and technique to consider. I was working through the challenges of storytelling that would eventually help me guide students through similar challenges,&quot March said. &quotBeing creative keeps you alive and in the moment. Professors can become stagnant when they don’t challenge themselves.&quot There were several challenges along the way. First, consider the changes in the publishing industry. Those changes are related to consumers’ reading and buying habits-hardback, paperback and now ebooks. Publishers, March said, are looking for manuscripts that have a certain appeal with customers—elements that make them most likely to sell. Some subject matters are well received and routinely distributed by a select number of publishing houses and editors. In addition to those challenges, there are no guarantees that your second or your 20th manuscript will be accepted and distributed by the publisher or editor who accepted your first successful book. Two of March’s seven books were recently published as was his latest CD, &quotTwister.&quot The fact that they were published near his retirement date is simply coincidental. &quotHatteras Moon&quot March’s crime novel is set on the Outer Banks of North Carolina, a nostalgic location for books and movies. &quotI’ve been working on these projects for a long time. I had to work on them weekends, summer breaks and over the years. Teaching and raising my two sons were priorities,&quot March said. &quotI am a story writer so I was able to apply my skills to both books and lyrics. The music on my CD was primarily country-my producer calls it alternative country– blues and a bit of gospel. The musicians are good and we really enjoyed working on this project.&quot Lullaby is a song March wrote from the perspective of a child who loses his mother during a fire two decades ago at a poultry processing plant in Hamlet, N.C. It is a song that reflects the tender relationship the between mother and son. It also reflects the impact a parent’s wise words have on their children. &quotStorylines are important in music formats such as blues and country. That’s the reason so many listeners connect with those music formats.&quot March is an award winning writer. His book, &quotLove to the Spirits&quot won the Independent Publisher Award &quotCatbird&quot was chosen as a BookSense Notable by the American Booksellers Association and &quotArmadillo&quot won the Texas Review Press Prize in the Novella. &quotTell Him You Saw Me&quot is a recently released book he hopes readers will favor as much as the past publication.