0
466 Views
Warning: json_decode() expects parameter 1 to be string, object given in /srv/users/serverpilot/apps/ecsunewsroom/public/wp-content/plugins/posts-social-shares-count/classes/share.count.php on line 66
0
Shares 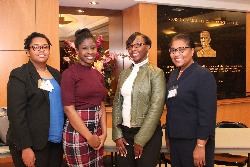 “Focus on what you want to do in the world.”

It was a simple statement that left college students spellbound while attending the 2016 HBCU Foreign Policy Conference at the U. S. Department of State. Jaclyn Cole, one of four young professionals working for the State Department, made that statement while serving as a panelist who relayed employment tips and survival skills to students pondering their futures. Cole assured the students that jobs with the State Department offer unique work experiences that few other employers can offer young college graduates.

“Our students won’t hear first-hand accounts like those in any other place. Here, they meet their peers from other HBCUs who are also serious about careers beyond American borders,” Coulson-Clark said.

“They meet representatives who describe incredible internships, fellowships and jobs with agencies that are working to better the lives of people around the world. This conference is relevant to three courses offered at ECSU: American Foreign Policy, International Relations and International Organizations. When students leave this conference, they are inspired to extend their job search beyond American soil.”

Council, a senior, said she was unaware of the many countries State Department employees are working in. She was happy the agency held the event again this year. Council was impressed by the agency’s selection of internships and careers for students from various degree programs.

“I obtained a better understanding of the solutions and contributions America has made with foreign policy. I’ve also learned how America promotes diplomacy, specifically in Sub-Saharan Africa,” Council said. “My trip to the U.S. Department of State allowed me to realize that there are numerous job opportunities out there. I thank Dr. Coulson-Clark for this opportunity. It’s something every student should experience.”

Students heard accounts from State Department employees whose careers range from five to over 30 years. Their jobs led them to Central America, Asia, Europe, the Caribbean and Australia. All four panelists were minorities who assured the HBCU students in attendance that their degrees could be useful to an agency that implements American foreign policy objectives.

Linda Thomas-Greenfield, assistant secretary of State for African Affairs and a speaker at the conference, recounted recent developments on the continent of Africa that were positively influenced by Americans. Thomas-Greenfield said Americans are looking for ways to improve trade agreements with several African nations. She assured her audience that State Department employees have a close view of countless acts of American generosity. Rewarding careers like those also reveal the importance of American partnerships with nations around the world. She’s witnessed how those partnerships positively impacted democratic transitions of power.

During an hour-long panel discussion, students learned how to prepare for simple and major lifestyle adjustments that State Department employees must make. Some of the panelists noted that succeeding in State Department jobs will require the ability to improve foreign language skills and to adjust to norms and customs that may differ from those in America. Monty McGee, a Norfolk State University alumnus, who now works as a public affairs officer in the Bureau of Economic and Business Affairs, said it is essential to keep an open mind before relocating and working in a foreign nation. McGee has worked with the State Department in Guatemala and Taiwan. He and his fellow panelists assured the students that rewarding internships and career positions are within their reach.