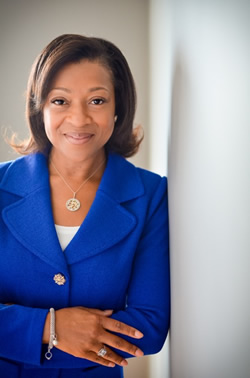 For more information contact Joni Worthington at (919) 962-4629 or worthj@northcarolina.edu.

CHAPEL HILL, NC -&ampnbspStacey Franklin Jones, a management and technology partnerships consultant with extensive higher education leadership experience, has been elected Chancellor of Elizabeth City State University by the Board of Governors of the 17-campus University of North Carolina. UNC President Tom Ross placed Jones&amprsquo name in nomination today (September 4) during a special meeting of the board, held on the campus of SAS in Cary. Jones, 53, will assume her new duties October 1, succeeding Charles L. Becton, who has served as interim chancellor since Willie Gilchrist retired from the post in June 2013.

In recommending Jones to the Board of Governors, Ross said: &ampldquoStacey Franklin Jones brings to the role of chancellor a rare blend of leadership experience in higher education, industry and government, as well as a practical understanding of how to guide institutions through serious challenges, whether academic or financial in nature.Â A mathematician and systems engineer by training, she has held executive, management and research positions at respected higher education institutions, including Johns Hopkins University and the University System of Maryland, and consulted for technology-focused corporations involved in large government and private contracts. Over a career that spans three decades, she has proven herself to be a strategic thinker who is engaged, resourceful, innovative and accessible.Â At this pivotal point in its history, I believe she has the right mix of skills, expertise and passion needed to guide Elizabeth City State University toward future success, and I am thrilled that she has agreed to join our leadership team.&amprdquo

Since 2011, Jones has been a senior consultant on executive management, technology partnerships, and corporate development. Based in Washington, D.C., she has helped technology-focused contractors develop their core capabilities in scientific and technology support services, build partnerships with subject-matter experts and scholars, and secure and manage contracts from federal agencies including the Departments of Labor and Health and Human Services.

Jones spent the early part of her career (1982-93) in private industry as a defense and electronic systems software engineer and product development manager for Northrop Grumman in Maryland.Â She then worked for several years as an engineering manager and system architect for other Maryland-based companies before transitioning into higher education.

She began her academic career in 1997 in the computer science department at Johns Hopkins University, where she was a research scientist and adjunct member of the research faculty, teaching systems programming, co-designing a &ampldquosurgery for engineers&amprdquo course, and conducting investigations funded by the National Security Agency.

In 2000, Jones was recruited to Benedict College in Columbia, S.C., the nation&amprsquos fourth-largest private historically black college. At Benedict, she served two years as chair of the Mathematics and Computer Science Department before becoming dean of the School of Science, Technology, Engineering and Mathematics (STEM), a position she held from 2002 to 2008. Under her watch, the STEM school achieved accreditation from key national organizations, and the physics program repeatedly ranked among the top five nationally for science degrees awarded to African Americans.

In 2007, Jones was named Benedict&amprsquos Vice President of Sponsored Programs and Research (later restructured as Vice President for Institutional Effectiveness and Sponsored Programs). In this expanded leadership role, she managed units responsible for 93 percent of the college&amprsquos revenue sources, secured millions of dollars in awards for various programs and implemented the college&amprsquos first academic foreign exchange program with China. In 2009, she was promoted to Senior Vice President of the university. Under her leadership, the dollar value of new grants increased by 50 percent over a two-year period.

In July 2010, Jones returned to Maryland to become Provost and Vice President for Academic Affairs at Bowie State University, a public historically black university.Â In that role, she oversaw academic programming and policy development and was credited with designing a comprehensive institution-wide academic assessment plan, process and timeline that culminated in a successful Middle States accreditation reaffirmation.Â In December of that year, she was named a Special Assistant serving the University System of Maryland.Â In this advisory post, she developed a methodology for assessing student retention success at the campus and system levels counseled senior administrators on faculty issues, student retention methods and financial planning and mentored faculty pursuing new investigators grant awards from the Department of Homeland Security and the National Science Foundation.Â Â She returned to the private sector in fall 2011.

Over the course of her career, Jones has secured and administered more than $100 million in proposals, grants and contracts from the federal government and private sector companies, including the National Aeronautics and Space Administration, Department of Defense, Department of Energy, Department of Transportation, National Science Foundation and National Institutes of Health.Â Â She has served on numerous review panels for federal agencies, and has written and spoken widely on computing and engineering management, as well as the infusion of technology in higher education.Â She has been honored with the South Carolina Governor&amprsquos Award for Excellence in Science (2007) and the Outstanding Woman in Technology Award from the National Society of Black Engineers (2004).

Jones has two young adult children who are graduates of the University of North Carolina at Chapel Hill and Winthrop University.

The University of North Carolina

The oldest public university in the nation, the University of North Carolina enrolls more than 220,000 students and encompasses all 16 of North Carolina&amprsquos public institutions that grant baccalaureate degrees, as well as the NC School of Science and Mathematics, the nation&amprsquos first public residential high school for gifted students.Â UNC campuses support a broad array of distinguished liberal-arts programs, two medical schools and one teaching hospital, two law schools, a veterinary school, a school of pharmacy, 11 nursing programs, 15 schools of education, three schools of engineering, and a specialized school for performing artists.Â The UNC Center for Public Television, with its 11-station statewide broadcast network, is also under the University umbrella.

Located in Elizabeth City along the northern coast of North Carolina, Elizabeth City State University (www.ecsu.edu) provides an academically rigorous, stimulating learning environment and a faculty committed to the education of each student. It offers 36 baccalaureate degrees and four master&amprsquos degrees, as well as targeted programs that appeal to various interests and fields of study, including the honors program, military science, study abroad, Viking Fellows for education majors, and a signature program in aviation. U.S. News &ampamp World Report&amprsquos &ampldquo2014 Best Colleges&amprdquo ranked ECSU #1 among Top Public Schools (Regional Colleges/South) and #18 among historically black colleges and universities. For the second consecutive year, Washington Monthly has ranked ECSU #1 among baccalaureate colleges for contributing to the public good.

NOTE TO EDITORS:An electronic version of this news release and a photo of Stacey Jones can be found on the University of North Carolina website at www.northcarolina.edu.