0
207 Views
Warning: json_decode() expects parameter 1 to be string, object given in /srv/users/serverpilot/apps/ecsunewsroom/public/wp-content/plugins/posts-social-shares-count/classes/share.count.php on line 66
0
Shares 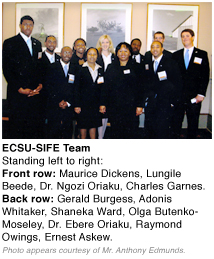 Eight ECSU students, members of Students for Free Enterprise (SIFE), won second runner up at a regional competition that slated them beside teams from five other universities in their league.

The student teams used written annual reports and live audio visual presentations to report the results of a community outreach project. An experienced panel of business leaders judged the teams. The teams were evaluated on how successfully they created economic opportunity for others. The SIFE teams completed their projects between fall semester (2009) and spring semester (2010) but presented them at regional competitions held between early March and mid April. The day-long event in Philadelphia, was one of 12 regional competitions held across the country. Two teams who win the regional championships qualify for SIFE USA.

Whitaker, a criminal justice major, was the only student who attended the event who does not major in business. Whitaker said students who are not business majors shouldn’t miss the SIFE regional competitions.&ampnbsp The event drew a diverse span of participants. He was so impressed, he plans to attend next year.

&quotIt was my first trip to the regional competition and a learning experience. The students were very professional, very knowledgeable,&quot Whitaker said.&ampnbsp &quotOurs was one of the few teams from a small university that competed. Some universities brought two teams that included 20 students. At an event like this one, you see the kind of students who will compete with you for jobs in the future.&quot

Garnes said the event was a good way to see the kind of skills students across the country are developing.

Dr. Ngozi Oriaku is the advisor for SIFE. Oriaku said the ECSU SIFE team made an impressive presentation at the regional competition and she looks forward to returning next year.