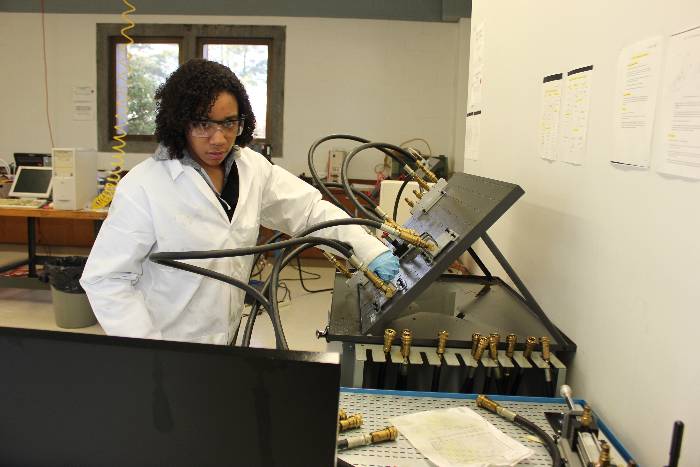 Shunafrica White wants to work with crash test dummies testing automobiles. It’s the sort of job that works well with the Conyers Georgia native’s motto: “Always prepare for the worst.”

But Shunafrica isn’t just about crash test dummies. Her focus is broader than that. With an interest in biomechanics Shunafrica wants to use her recent experience building a robotic arm to make better dummies.

The spring 2016 ECSU graduate is currently working on her Masters in Bioengineering at North Carolina A&ampT. But it was the work and the opportunties she found at ECSU that would prepare her to pursue her dreams.

Shunafrica spent the summer of 2015 on an internship at the University of Virginia. It was there that she was introduced to robotics. Her mentor she explained suggested she look into the field by building an arm.

“It was extremely challenging” she said. “You have to program the motor to get it to do what you want it to do.”

Shunafrica is pursuing a graduate degree in bioengineering from much of the same reason the challenge. This field she explains will help her to build better crash test dummies. Those dummies would simulate the human body more efficiently offering researchers a better look at how impact affects the body.

Shunafrica was also a recipient of the second place award at the 2016 Emerging Researchers National (ERN) Conference in STEM. More than 700 students attended and presented their research at this conference.

She also had a poster in the Civil/Mechanical/Manufacturing Engineering category entitled “Mechanical Design of Coronagraph Cubesat.” Her poster was in competition with schools such as Howard University Tuskegee University University of Georgia University of California Irvine and Southern University and A&ampM College.

Shunafrica was honored at an awards ceremony last February in conjunction with the ERN conference in Washington DC. She also received travel award fund from ERN conference to attend and present her poster.

Shunafrica’s dedication to her work and the success she is experiencing at ECSU can be attributed in part to two professors Dr. Mehran Elahi and Dr. Akbar Eslami. She says their encouragement and support have made a big difference in her experience here.

“They have shown their dedication to my education by always being available in case I have a question about something” she said. “They spend long hours in their offices making sure that I have everything I need to thrive in the engineering field.”

While Shunafrica loves engineering she has other passions too. A percussionist with the Elizabeth City State University band she says she enjoyed “studying playing the xylophone and cymbals listing to music and watching movies and eating popcorn.”

Aside from being a member of the band and banging away on percussion instruments Shunafrica was a member of the Technology Club Mu Phi Sigma National Percussion Fraternity and the American Society of Engineering Education.

Shunafrica says her experience at ECSU has helped her grow academically and socially. Her work here has taught her to push herself further developing a stronger academic base from which she can pursue her dreams. Socially ECSU has helped bring her out of her “shell.”

“When I came here it was the most welcoming place” she said. “Everyone held out a helping hand.”

But every student needs a place to escape now and then and Shunafrica says her go-to place on campus was the band room.

“When I’m in there playing music it is the best feeling in the world” she says. “I completely forget about everything that is going on in the outside world.”

And to her fellow ECSU Vikings current and future Shunafrica says make the most of your time at school get to know your professors and take advantage of what they have to offer you. Your time here she says will be well spent staying on top of your education paying attention to your responsibilities.

“I have seen way too many students get set back because they failed to pay attention to the requirements.” 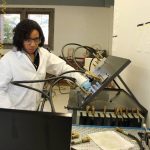