0
535 Views
Warning: json_decode() expects parameter 1 to be string, object given in /srv/users/serverpilot/apps/ecsunewsroom/public/wp-content/plugins/posts-social-shares-count/classes/share.count.php on line 66
0
Shares 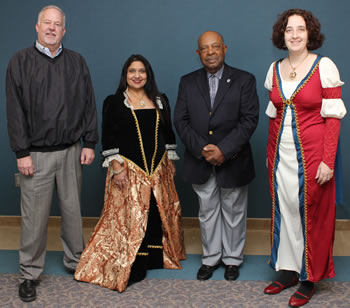 This year marks the 450 anniversary of William Shakespeare’s birthday. Two professors from Elizabeth City State University, who teach literature at the university, strolled the aisles of the Pasquotank County Library in search of the poet/playwright’s fans. They found patrons who recalled Macbeth, Romeo and Juliet, Julius Caesar and more of Shakespeare’s works while attending high school and college. Among those patrons were two county commissioners. The professors invited the commissioners and the patrons to the campus this week. The Department of Language Literature and Communication will host &quotAn Afternoon with The Shrew,&quot a lecture by Dr. Vandana Gavaskar and Dr. Chantelle MacPhee on the film versions of William Shakespeare’s comedy, &quotThe Taming of the Shrew&quot from 2 p.m. to 4 p.m. on March 26 in room #138 of Johnson Hall on the campus of ECSU. The professors say the discussion will well prepare attendees for a live performance later in the week at ECSU. The Virginia Stage Company will perform, &quotTaming of the Shrew&quot in the auditorium of the Mickey L. Burnim Fine Arts Center on March 28. See www.ecsu.edu for details of that performance. County Commissioner Jeff Dixon, left, and County Commissioner Cecil Perry, third from the left, welcomed Dr. Vandana Gavaskar, dressed as Bianca, (second from left) and Dr. Chantelle MacPhee dressed as Kate (far right), characters from &quotTaming of the Shrew&quot to the Pasquotank County Library.