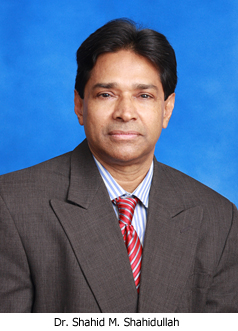 In the last decade, Americans have heard and seen more news reports of crimes committed by criminals outside their native country. When the perpetrators target Americans, extensive searches are conducted to capture the criminals. Yet, bringing the guilty to justice is a grueling process. The mere definition of crime can vary from one society to another. Customs and norms vary significantly among the world’s populations, impeding the search and transfer of criminals. Drastic differences exist between the operations manuals of the world’s law enforcement agencies and judicial systems. Sorting out the differences may require the work of several different experts. Preparing those experts for their jobs is no small task for college professors. Dr. Shahid M. Shahidullah, a professor of criminal justice at Elizabeth City State University and chair of the Department of Criminal Justice, Sociology and Social Work, has published a new textbook that surely will make a difference. His book, &quotComparative Criminal Justice Systems, Global and Local Perspectives,&quot shows the reader the many factors that impede efforts to bring criminals to justice. &quotBecause there are few books that cover a wide range of criminal justice systems in countries such as China, Saudi Arabia, Iran and Pakistan, we knew this textbook would change the criminal justice literature,&quot Shahidullah said. &quotThe publisher asked me to pay particular emphasis on Shariah Law and its use in Islamic countries. No book covers Shariah Law as it is used in different countries now,&quot Shahidullah said. &quotI have presented a number of articles at national conferences and can assure you that a nation’s use and interpretation of the law can impact who is determined to be a criminal and who will likely be viewed as a victim.&quot Shahidullah, a native of Bangladesh, has been an instructor at ECSU since 2009. He teaches mostly upper level criminal justice courses but also teaches freshmen level courses as well. He tells his students that the growth of criminal justice as a major for college students is a reflection of Americans preoccupation with security. Societies are now complex, with new technology and information sources used to commit crimes. As a result, investigators and emergency responders are forced to acquire an understanding of the law and legal institutions. Professors are challenged to prepare students for an ever-changing nature of crime and criminal justice systems. &quotCriminal justice, the college major, is becoming science intensive, knowledge intensive, quite different from what it was 30 or 40 years ago. That is why you have seen so much expansion of majors now related to criminal justice,&quot Shahidullah said. &quotWe also are seeing a larger number of police officers returning to universities to earn bachelor’s degrees for professional development and advancement. Some need more information about the law because the police academies offer limited training on the law,&quot he said. Televised criminal investigation shows also are fueling the interest of students who choose criminal justice as their major. What that curriculum now may entail are courses in computer science, chemistry, biology and forensic science. &quotToday, many of the issues related to global terrorism and homeland security are at the forefront of the news, which is luring more people into this college major,&quot Shahidullah said. &quotUse of GPS technology, crime mapping and DNA are tasks that police officers may not perform unless they are well educated.&quot Shahidullah’s book will be used for the course, &quotCJ 496 Comparative Criminal Justice.&quot It is a long-standing course now revised to explore the challenges of law enforcement near and far from our borders. When discussing the Middle East with his students, Shahidullah examines Saudi Arabia, Pakistan, and Iran in terms of Islamic criminal justice, and the way it conflicts and converges with modern law. There also are explorations of how legal institutions in England, Canada, Germany, Japan and Australia are becoming more similar to each other in sex offender registration, criminalization of child abuse, sexual harassment, domestic violence and the victimization of people with alternative lifestyles. Shahidullah said the book will be used in the classroom at ECSU in fall 2013. His students will learn far more from the class than any TV crime show will ever reveal.