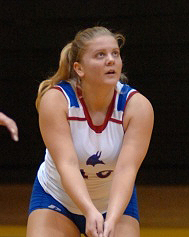 HAMPTON VA- Seven members of the Elizabeth City State University volleyball squad have been voted to the 2009 All-CIAA First and Second Team as released by the conference office Tuesday afternoon.

The team is led by three-time CIAA Player of the Year Chekimbrell Jefferson of Fayetteville State University. The Lady Broncos and Lady Vikings had the most All-CIAA representation with seven honorees each.

For Lady Vikings Eva Johnson Xie’Ara Maybank-Smallings Jennifer Hendy Stacie West and Cassie Noe were all named All-CIAA First Team performers while Samarri Griffin and Ashley Tarasoff were tabbed for the All-CIAA second team. ECSU will begin compete in Pool A beginning on Friday at 11:00am against Shaw University. At 1:00pm they will take on Bowie State University then will wrap up the day against Fayetteville State at 7:00pm.

Should they advance out of pool play in the double elimination tournament ECSU will face off against either the winner or the runner up of Pool B at 5:00pm or 7:00pm in the semi finals on Saturday. The Championship game will be played on Sunday at 1:00pm.