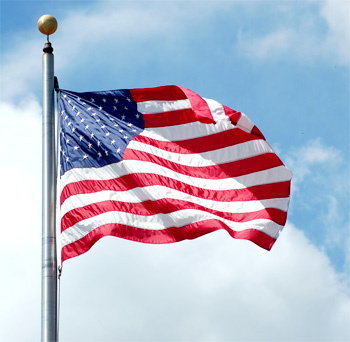 Like Americans across this nation, local citizens proudly hung and draped the nation’s flag in memory of the nation’s fallen heroes. Memorial Day is the federal holiday that allows the nation to collectively recall and honor men and women who died while serving in each branch of our military. They served beside veterans and active duty men and women who will perform memorial concerts and a host of roles at annual ceremonies that remind us of the cost of freedom.

Sergeant First Class Roger Van Orden was one of them. Van Orden currently is on staff in the Department of Military Science at ECSU. He has served 20 years in the military-four in the U.S. Marine Corps and 16 in U.S. Army. Van Orden said he was surprised when asked if he would speak for a local ceremony but agreed. He spoke at 1 p.m. on Monday at Westlawn Cemetery.

&quotOn Memorial Day we honor the values and beliefs that were in place long before we arrived in the military. These people actually lived up to the values you hear so many people speak about,&quot Van Orden said. &quotWe as a people should focus more on the lessons we could learn from them especially in a world today that is short on role models.&quot

&quotI was in the 101st Airborne,&ampnbsp in 2005-2006 when the fighting in Iraq was intense. We were fighting southwest of Bagdad in what was known as the Triangle of Death, where we lost 3 of 38 in the platoon and over 20 were wounded over the year. Some of the wounded were treated then returned to duty but some required additional medical care. I will remember them when I speak Monday and urge the people in my audience to never see this day as just another day off.&quot