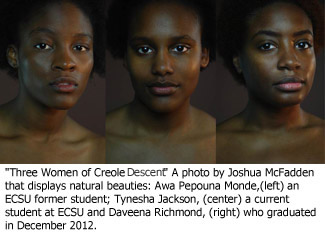 Joshua McFadden, an alumnus (’12) from Rochester N.Y., recently earned the Best Photo award in a photo contest hosted by Mozambique Heritage, a non-political association near London for the cultural and educational advancement of those of Mozambican decent. McFadden’s photo, &quotThree Women of Creole Descent,&quot is a color image of two former ECSU students and one current student who are of creole dissent. McFadden’s black and white version of the photo is on display in the new university gallery in the Kermit E. White Graduate and Continuing Education Center. These two images are part of a six-piece series featuring the natural beauty of African American women. He first displayed all six at his senior exhibition last spring. Each senior who majors in art is required to publicly present a selection that displays the best quality of the work that was completed throughout undergraduate years. &quotWith this series I chose to show African American women in a positive light. I wanted to show the natural beauty of the women, the melanin of their skin, their features. This series is rid of the elements often found in commercial advertisements,&quot McFadden said. &quotThese women have no chemicals in their hair. They are wearing no make-up and no jewelry. I wanted the people who view the image to see bold eyes that pierce the soul when they look into the camera.&quot McFadden considered several possible subjects but decided on these three women who are unrelated: Awa Pepouna Monde,(left) a former student Tynesha Jackson, (center) and Daveena Richmond, (right). He credits his education in an art department of a Historically Black University with preparing him to focus on subjects who celebrate their natural beauty. McFadden wants people who view his images to remember that women can be beautiful without accessories. McFadden says these women were free from the burdens of modern beauty trends when they poised in such a natural state. Three of his photos display the women from the shoulders up and three display three quarters of their bodies. &quotIt was great to win a photography contest. I feel so honored that people from a different country respect my work and it lets me know that I am on the right track,&quot McFadden said. # # #