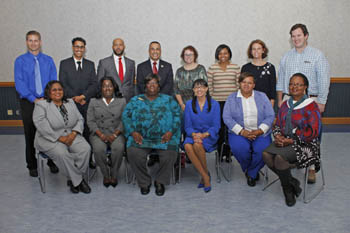 Elizabeth City State University reached another milestone December 12 when 14 students received their Master of School Administration (MSA) degree. They were participants in the Northeastern North Carolina School Leadership Program (NNCSLP), a joint endeavor between the university and nine area school districts: Bertie, Edenton/Chowan, Edgecombe, Elizabeth City-Pasquotank, Northampton, Perquimans, Warren, Washington and Weldon City. A 2.9 million grant from the U. S. Department of Education (2009) funded the program that was designed to increase the number of new certified principals and assistant principals to serve high-need schools.

The majority of the program participators began as teachers but many have advanced to become school administrators (assistant principals, principals or director of instructional specialist, instructional facilitator.) These master’s degree graduates attended classes for a maximum of two years and summer retreats. Some of them attended nationally recognized, leadership conferences for educators and some served as presenters.

Fifty-two people have already earned their MSA degrees through this federally funded program. Those people participated in commencement ceremonies held over the last four years. The participating school districts benefit when these educators return to their schools with updated skills and knowledge that improve the quality of instruction offered there. The funds for this grant have been exhausted so these MSA graduates are the last to benefit from the NNCSLP

Not pictured is Leondas Hendricks