0
165 Views
Warning: json_decode() expects parameter 1 to be string, object given in /srv/users/serverpilot/apps/ecsunewsroom/public/wp-content/plugins/posts-social-shares-count/classes/share.count.php on line 66
0
Shares 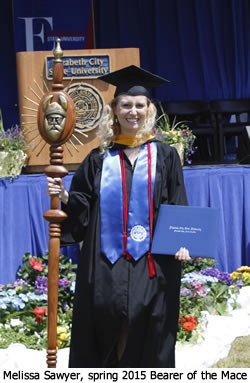 For a recent graduate, relocating to begin a new job in the fall requires a lot of planning. Yet, Melissa Sawyer is reflecting on the goal that kept her busy the last four years. On May 9, she achieved her goal and heard it announced at ECSU’s 160th commencement ceremony. She worked diligently to conclude each semester the same way-by earning an A in every course. It was a pattern she was determined to repeat once the goal was set. Shortly after entering the university as a freshman, Sawyer learned there was a special recognition reserved for the graduating senior who completed all their courses at the university and earned the highest grade point average-&quotBearer of the Mace.&quot Becoming Bearer of the Mace for her graduating class would be a great way to inspire the high school students she would ultimately teach. Sawyer adores math so she decided to become a math teacher. Although she taught preschoolers Sunday-School classes in the past, Sawyer decided she was better suited for teaching high school students. She completed her student teaching at the same high school she graduated from, Camden County High School. What better way to prepare for the future, she thought, than to complete student teaching with the very instructors who positively influenced her? Sawyer cherished the opportunity to earn her bachelor’s degree at ECSU and remain close to family. She never lived on campus but commuted from South Mills, N.C. to complete her courses. Unlike many college students, she bypassed the social scene. She opted to focus solely on her goal. That included long hours of preparing for classes and studying until 2 a.m. for tests. Though she only recalls attending one ensemble concert, Sawyer has favorable comments about her undergraduate days. &quotI loved my experience at ECSU, the small classes. You are able to cover so much more when your class is small. You can go a lot faster and learn a lot more with a small class size, &quotSawyer said. &quotMy classmates and I were really close and we would form study groups. My professors were passionate about their subject. I couldn’t have asked for a better advisor than Dr. (Farrah) Ward.&quot Through her advisor, Sawyer learned about one of several scholarships that covered all her college expenses. Between 2013 – 2015, Sawyer received the Robert Noyce Teacher Scholarship, which targets ECSU students who are prospective teachers. Participants in that scholarship program agree to teach youths in the fields of science, technology, engineering and mathematics. The Noyce Scholarship not only contributed to her tuition costs but a paid internship where Sawyer taught middle and high school students. She is looking forward to relocating with her husband to Charlotte, N.C., where she will teach high school students this fall. &quotI like working with high school students who are nailing down what they want to do. Your high school teachers influence what your career choices are and I like having that impact,&quot Sawyer said. She realizes many students think math is too difficult to understand but plans to show them how math is used daily on assorted jobs. &quotIf you are going to work in construction you can use trigonometry– finding how to use different angles, how to make things stick. I tap into their (students’) interests such as racing to show them how math is useful.&quot &quotI level the playing field and say we are not all going to be great in math but we can learn.&quot