0
211 Views
Warning: json_decode() expects parameter 1 to be string, object given in /srv/users/serverpilot/apps/ecsunewsroom/public/wp-content/plugins/posts-social-shares-count/classes/share.count.php on line 66
0
Shares 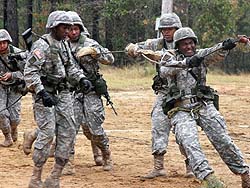 Cadets from the ECSU ROTC Viking Battalion finished 10th out of 19 at the Fourth Brigade Ranger Challenge held at Fort Bragg, North Carolina.

The Fourth Brigade of ROTC is comprised of 39 colleges and universities. The 39 colleges are divided into two divisions based upon the size of the university and the number of cadets in the ROTC program. The ranger challenge is an overall military skill competition.

Most of the students on the ROTC Battalion, have competed in previous ranger challenges. Lt. Col. Barnes said the team performed better this year than last year. The ranger challenge showcases the skills of officers trained in ROTC.

&quotThe cadets learn to compete with cadets from other universities in a grueling series of events held over two days. There are individual and group exercises that test their ability to persevere. The ROTC Battalion earned third place in the marksmanship category.&quot Lt. Col. Barnes. &quotNext year the team is looking to place in the top three in our respective division. Their performance at the ranger challenge prepares them for the mental and physical challenges they will encounter in U.S. Army.&quot

&quotThere is nothing easy about the Ranger Challenge. The average Joe off the street wouldn’t be able to do the things we do there nor would most athletes,&quot Perry said. &quotIn some cases you are running while carrying your equipment uphill. You have to use your map, compass and land navigation skills during the written, timed, land navigation test. We also complete day and night land navigation tests on foot so this is a physical and a mental challenge. Safety is a priority.&quot